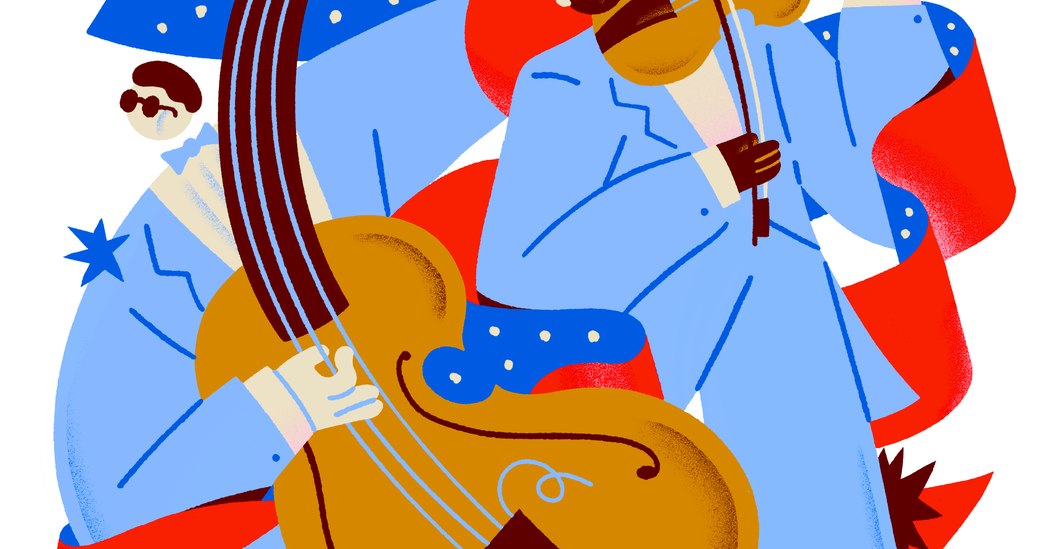 What is American classical music, exactly? When crafting their answers, programmers have always chosen one of two approaches: cautious, piecemeal efforts or a risky, all-in-one merge.

The piecemeal strategy might admit that elements of jazz composers like Duke Ellington were to be in the mix, but as a separate concert or album, rather than with the fully notated and regularly performed works of Gershwin or Bernstein. The merger approach was heard much less frequently. But it existed. In 1976, American pianist Frederic Rzewski offered listeners an inventive mix of two differently scored piano pieces by saxophonist and improviser Anthony Braxton – plus a sonata by German-born composer Hanns Eisler and his own “No Place to Go but Around “- in a dizzying recital.

This concept, once experimental, is now one that the general classical public sometimes manages to adopt, as on a recent album by violinist Daniel Hope, “America”. Experimenters are still doing fusion too – like on the PUBLIQuartet string quartet’s new version, “What Is American”. A third way — to commission entirely new music — is demonstrated in another recording, violinist Johnny Gandelsman’s three-disc sprawling “This Is America,” due out July 1.

Hope’s album is proof that the fusion approach is not necessarily easy. On his recording, released earlier this year on the Deutsche Grammophon label, he valiantly tries Sam Cooke’s “A Change Is Gonna Come” as well as “Come Sunday”, from Ellington’s “Black, Brown and Beige”. (Mainstays of a more framed American repertoire, such as works by Bernstein and Copland, are also on the program.)

In the Cooke, Hope’s tone is pleasant enough – if a bit too pale to match the soul of Joy Denalane’s voice. But the extract of Ellington is a missed opportunity, with an opening too fast.

Judge this reading against a 1958 Ellington recording in which violinist Ray Nance relishes the same melodic material for an additional 10 seconds, after his entry. There’s a reason you don’t move quickly through sentences; extra seconds can mean everything.

On Hope’s album, the best performances come early, when he tackles a handful of Gershwin tracks. Here he invites a trio led by pianist Marcus Roberts to help him with improvisations and the American swing idiom. Their participation inspires fiery playing from Hope, whose tone dances happily during “Fascinating Rhythm.” (He also plays bluesy double-stops over drummer Jason Marsalis’ beats near the end of “Summertime.”)

However, the collaboration between Hope, the Zurich Chamber Orchestra and the Roberts Trio remains unfailingly polite, the latter being visibly tighter. streaming to this ensemble’s digital concert hallin which the Roberts Trio has been engaged for a bold and advanced reading of Gerswhin’s Concerto in F.

“America” ​​seems to be aware that this could be a problem. On the cover, Hope is seen dressed in a waistcoat and a tuxedo, and leaning against a vintage car parked in front of a building whose windows are decorated with portraits of great American musicians. But the artists pictured in these window frames don’t quite follow the sound of the album. There is not a single passage that has the explosive quality of saxophonist and bass clarinetist Eric Dolphy’s ecstatic hopscotch between registers and timbres. So what’s he doing in the album cover?

Beyond his own music, Dolphy emerged as a key soloist in the civil rights-era musical essays of bassist and composer Charles Mingus, particularly in “Original Fables of Faubus” and “Meditations on Integration.” Yet the protest poetry of Dolphy and John Coltrane – another artist pictured on the cover of “America” ​​- is not present here beyond the title of Cooke’s promising pop song for change.

As a result, Hope’s album does not musically confront the troubled state of the union, nor does it acknowledge past revolutions in this country’s ever-evolving jazz tradition. The fiery music that Coltrane and Dolphy played in 1961 was criticized at the time as “anti-jazz” in some quarters – a take that hasn’t aged well. But while Hope seems eager to quote the fire of American ingenuity on an album cover, he doesn’t want to get scorched by it in practice.

The opposite is true for long periods of Gandelsman “This is America” project, an ambitious ensemble that tries to take the national temperature by soliciting new solo works from a group of twenty composers. In his liner notes for the album, the violinist cites a host of issues as inspirations for his impetus to commission these pieces: the pandemic; the police brutality and death of Ahmaud Arbery, George Floyd and Breonna Taylor; the more than four million acres of California forests lost to wildfires in 2020; unemployment; “the rhetoric of the vicious electoral cycle.”

Many composers responded to Gandelsman’s prompt with a similar sense of overwhelming dread and sadness. Fair enough. But as a listening experience, the nearly four-hour program could have used more works like “Sahra be Wyckoff,” by Syrian-born clarinetist and composer Kinan Azmeh. Written for a time when it was difficult for friends and artistic collaborators to get together, it recalls a happier past of jam sessions in Brooklyn. Gandelsman’s intoxicating performance sent me back to Azmeh’s impressive 2021 album “Flow”, recorded with Germany’s NDR Bigband. This ensemble is another example of the ability of American energies to change – with Ellingtonian orchestration merging with melodic Middle Eastern modes.

Otherwise, the pieces Gandelsman received tend towards darker moods and subject matter – including a memorial to a deceased friend and multiple meditations on civic strife. And some pieces reflect the composers’ long-standing concerns. So when Tyshawn Sorey offers the contemplative (and sometimes ferocious) “For Courtney Bryan,” the miniature may serve as a small but important addition to the composer’s rapidly expanding catalog of prismatic tributes to his musical contemporaries. But “For Courtney Bryan” is only lightly engaged with Gandelsman’s stated hope that the commissions “in some way reflect the times we all lived in.” (For Sorey’s more specific thoughts on our moment, you could turn to his searing “Save the Boys” since last year.)

Yet everything is played with precision; Gandelsman listens to the precise nature of each artist and adapts his sound to each. The second disc offers a rush of contrast in composition and interpretative effort. Here you’ll find Angélica Negrón’s dreamy ode to childhood stargazing (“A Través del Manto Luminoso”), where Gandelsman’s direct, fluty sound merges seamlessly with the electronic backing track.

Ebun Oguntola’s dark but mysterious ‘Reflections’ push Gandelsman towards contrasts of arc pressure, suggesting unpredictable twists and turns of an individual’s mind. On Tomeka Reid’s sing-song then virtuoso “Rhapsody,” his dynamic changes are more fluid in nature – and quietly impressive. And Gandelsman brings a charming quality of free association to his take on Terry Riley’s “Barbary Coast 1955” episode.

Kaleidoscopic invention in these courses of works throughout the PUBLIQuartet “What is the American“, my favorite classical album of the year so far. It features award-winning arrangements by Dvorak, as well as “Black Coffee” by Tina Turner and the Ornette Coleman tracks “Law Years” and “Street Woman”. There’s a nodding performance by Vijay Iyer’s String Quartet “Dig Say It” (itself inspired by James Brown).

And there’s a newly commissioned string quartet, “CARDS 11.11.20”, by Roscoe Mitchell – the composer-saxophonist who rose to prominence in the 1960s, alongside Braxton and other members of the Association for the advancement of creative musicians. Like other works in Mitchell’s “Cards” series, this entirely composed effort invites improvisation (the musicians being allowed to mix in fragments of the score, at some point during the performance); the players of the PUBLIQuartet sound at ease in this typically American challenge.

Winding among these and other works are the fractured quartet recitations of Oliver Wendell Holmes Sr.’s obscure fifth verse to “The Star-Spangled Banner.” In the midst of the Civil War, this poet – and the father of Supreme Court Justice Oliver Wendell Holmes Jr. – excoriated “the traitor who dares to defile / The flag of its stars and the page of its history!” (Think of this in the context of the January 6 rioter who carried the Confederate flag inside the US Capitol building, and who was recently sentenced one felony and four misdemeanors.)

Never overloaded, “What Is American” packs fun, eclecticism and civic engagement into the length of a single CD. The album’s ability to weave together multiple traditions reaches its apex in its sweeping but recognizable adaptation of Dvorak’s String Quartet No. black Americans like Harry Burleigh (as well as Native American Melody).

We have dozens of pristine and accurate renditions of this warhorse; PUBLIQuartet players have rightly guessed that it can handle a bit of reinvention. Their performance represents, they note, “improvisations” on the work. They practically draw and tear apart the first and second themes of the opening movement, introducing or developing them with rough and coarse accents.

Before the final recap of the move on these themes, players give us a prickly moment. Having completed their version of the development, they perform a downshift in tempo before collectively improvising in a high appeal blues mode.

Seconds later, when the band turns to Dvorak’s American-inspired sound, there’s a new idea missing from other albums with similar aspirations: a suggestion that group dynamics, as much as individual interpretations , are essential to American music. It won’t solve the country’s problems, but by definitions of the contemporary American spirit, it’s the recording I’ll be playing for my loved ones this 4th of July.