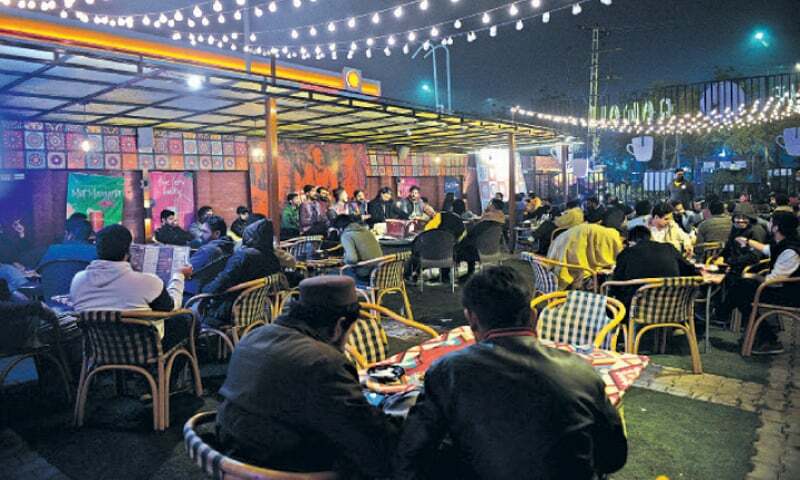 Under a starry night with tea, music and food – Journal

Every day, as evening approaches, Johar Town’s main Khayaban-i-Firdousi road comes to life and takes on a festive look when more than a dozen similar cafes/restaurants on either side of the boulevard turn on their multicolored lights and live qawwali appeals to customers. At first glance, almost all of these open-air food outlets seem to have been inspired by the roadside dhabas in Karachi, but the similarity ends there – these restaurants only have “chai” or “tea” in their quirky names such as Chai Tonight, Chai Rock, Chai Studio, Cup Shup and Hum Tum aur Chai to name a few but, in fact, are restaurants in their own right with elaborate menus instead of following the dhaba pattern of tea and snacks.

However, people are drawn to these places for their affordable food, terrace, vibrant atmosphere and live music, in some cases. All of the owners claim that they provide a safe and friendly environment whereby the majority of their clientele are families, that they cannot afford to follow the low-profit dhaba model, and that they have named their businesses as so that they are catchy.

Usman Javaid, the owner of Chaye Qawali, says that when he started this business in 2019, the combination of food and qawwali was new at the time and has since been plagiarized by almost every setup that has followed. “Our daily performance of qawwali has given new life to this kind of singing and that is what attracts customers. The majority of our customers are families due to our friendly environment,” Javaid told Dawn. However, he says, the only downside of not having an indoor facility is closing up shop in bad weather and rain.

Chai Khas opened in the same year in 2019. Claiming to be one of the region’s pioneers, it is now one of dozens of similar joints within just a few miles – many of which have seen Covid-induced lockdowns as a possibility of creating outdoor dining areas.

“We were probably the fourth or fifth on this route at the time. It used to be that people used to go to expensive cafes for continental food and tea/coffee, but now they have plenty of affordable options in a nice ambience. Many of these outdoor outlets launched during Covid when indoor dining was banned. We were also the first to introduce tandoori chai to this locality, but now, in addition to our selection of teas, our steaks and pizzas are also popular,” restaurant manager Fahad told Dawn.

Not all of these chai themed restaurants play live music, especially qawwali, to attract customers, some keep going with just easy-to-go food. Fahad, a media graduate who runs the restaurant, says a few of the nearby places have qawwali, but not Chai Khas. “I feel like people come here to sit in peace, with no music or noise to disturb them. Tea lovers want to drink their favorite drink in a quiet environment. The atmosphere here is appealing to families specifically.

Muhammad Umair Afzal from Chaye Ghar is more realistic with his take on the trend of these restaurants on the same road. He says when he opened his restaurant in 2018 it was the third on that particular stretch of road. But, he admits, he also rushed into the rat race, as many people in the food industry do without planning or research. “This trend started in 2017, after which everyone followed, including me. Despite more than 20 such outlets on the same road, similar sites are still popping up, whether they are sustainable or not. people who have no knowledge of the industry and the costs involved are entering this business without any research and most did so during Covid when indoor dining spaces were closed.

Although it follows a tea stall theme, he says their food, especially continental, is more popular than the range of teas. “We have a good peaceful atmosphere. Instead of having live music every day, we organize fortnightly or monthly events like qawwali night, dhamaal night, drum circle or other musical events.

These restaurateurs admit that high expense and profit was the main concern that led them to deviate from the dhaba theme and introduce full and varied menus. “We have 150 items on the menu in different categories, otherwise we can’t break even with just tea and paratha like in dhabas,” says Javaid. Fahad echoed this idea, saying they needed to add food because they couldn’t support themselves due to competition and high utility bills to pay.

Dozens of competing businesses in the same neighborhood affect these entrepreneurs in different ways: for some it’s healthy and for others every day is a struggle. Afzal says having around 25 similar cafes on the same road hasn’t hurt them much, because that way a market develops and the customer base increases. Fahad says they had to struggle for the whole first year because of the rivalry, but now they have loyal customers.

More than the competition, all three are unanimous that Covid-19 has inflicted a lot of damage on the restaurant industry, shutting down many businesses and causing losses in the millions. And the most recent factor bothering them is rising inflation. “We heard that the price of tea leaf increased by 21% on the 15th of this month, which will affect our costs and subsequently our attendance,” Chaye Qawali’s Javaid laments, which Chaye Ghar’s Afzal admits. also.

Fahad, the manager of Chai Khas, laments that many cafes have closed due to inflation, fierce competition and fewer people to populate these spaces.