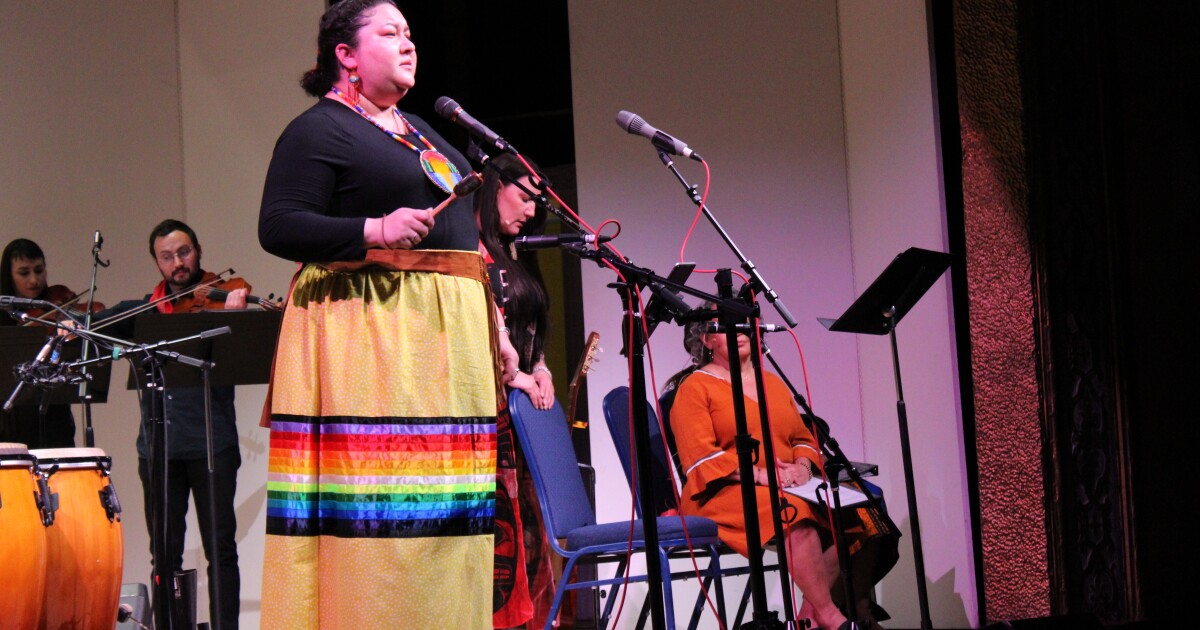 What does it mean to be connected to a place, to have a homeland? That’s a question posed by a music and storytelling project currently touring the state.

On a recent evening at the Rockport Opera House, a dozen musicians tuned their instruments before taking the stage for the second performance of the Welcome Here project.

The project revolves around the stories of three women – one from the Penobscot Nation, one from Puerto Rico and one from the Democratic Republic of Congo – who each have a distinct relationship to their home country.

The program was organized by Palaver Strings, a musician-run string ensemble and music education nonprofit based in Portland. For this project, the musicians of Palaver play an accompaniment role with guest artists of Abenaki, Congolese and Puerto Rican origin.

The narrative aspect of the project was directed by Sherri Mitchell, an author, lawyer and educator born and raised on the Penobscot Reservation.

“I can answer the question, ‘Who are you?’ And where are you from?’ one word: Panawahpskewi,” Mitchell said. “And so knowing that’s true, that gave me a starting point.”

Mitchell was also one of three storytellers featured on the show.

“Long before I was born on this earth, I was held in this soil, like an image in the deepest dreams of my ancestors,” she said on stage at the Rockport Opera House. “It was here that I first learned of my place in creation, with the people of the Dawn, the guardians of the eastern gate.”

Between narration sections, Mitchell was joined on stage by Wabanaki singers Tania Morey and Lauren Stevens.

Mitchell said her connection to the homeland was embodied by her grandmother, a fluent Passamaquoddy speaker.

But she said her grandmother had to fight to retain her language against attempts at cultural erasure that took place in Maine. When her grandmother was eight, she was forcibly sent to a missionary school that punished students for speaking their language.

“So this little child, who had been taken from her loving grandmother, spent the next few years being beaten every time she opened her mouth and tried to communicate,” Mitchell said. “She was forced to learn English through torture.”

Despite this story, Mitchell said she feels a deep sense of privilege and gratitude to live in the place where she can reunite with her family for generations.

For fellow storyteller Adele Ngoy, this sense of continuity has been broken by the war. Ngoy, a fashion designer from the Democratic Republic of Congo, had to flee her country as a refugee in the late 1990s with her three children.

They ended up in Portland, where Ngoy faced the daunting task of building a new life from scratch. She said that as a mother she also rose to the challenge of maintaining her sense of Congolese identity even as her children grew up steeped in American culture.

Twenty-three years later, Ngoy is running a fashion business again and has married a Mainer. Now, she says, Maine and Congo feel like home.

“I have to balance. I have to do a lot of balancing,” she said.

For the third storyteller, Blanca Santiago, the idea of ​​belonging to a place is difficult to disentangle.

“What is homeland? Is this the home you make here in Portland, where you call home? Or is it the place of your birth? Santiago said.

Santiago is originally from Puerto Rico, but left the island as a child and has lived in Portland for several decades. She now works as a therapist.

Santiago says she feels a deep connection to Puerto Rican culture, especially the music, performed in the show by guest artists Viva and Zayra Ocasio.

But Santiago said she also feels a sense of mourning for the island’s indigenous Taino culture and language, which have been largely stifled by centuries of colonial rule.

She said Mitchell’s story and the Wabanaki songs touched her, as she grappled with the colonial history of her own homeland.

“What happened there, in my homeland, and what happened here on this soil, it’s almost like a parallel experience,” Santiago said.

In telling her own story, Sherri Mitchell turns to her grandmother, who died a few years ago, to offer a message in passamaquoddy.

A grandmother herself, Mitchell said she now teaches the language to her own grandchildren.

Postpartum depression: A mother from NS shares his story to help others

Alexander Payne “I will watch any good movie”