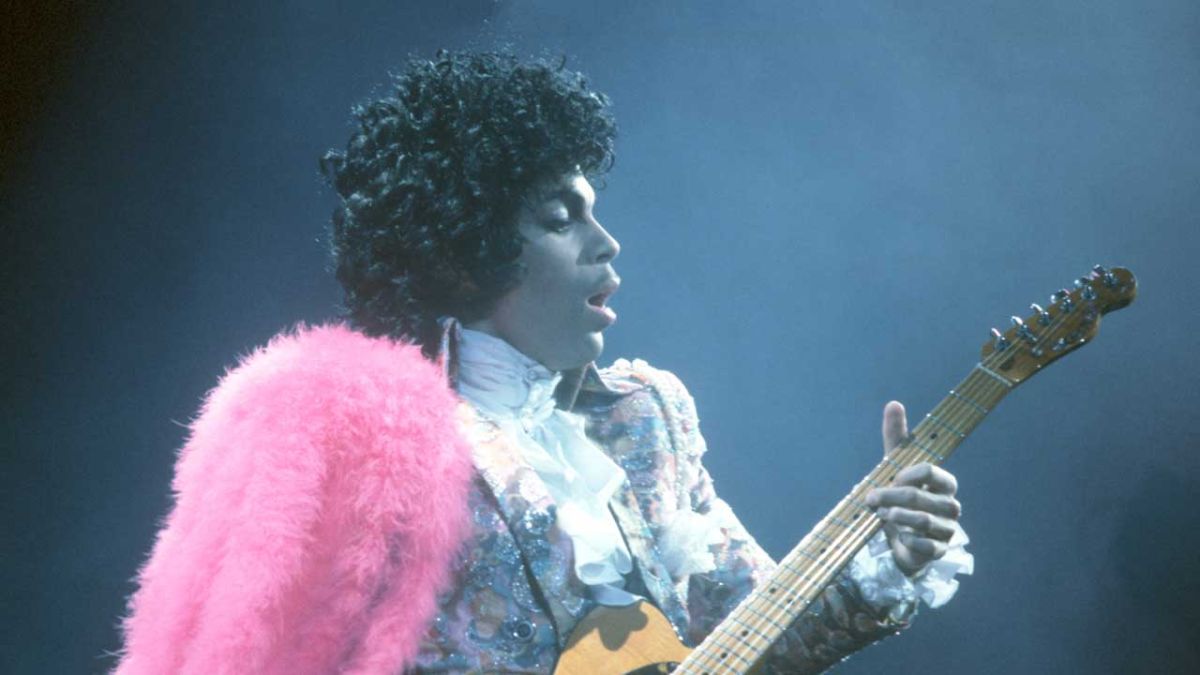 The story behind the series that made Prince a global superstar

It is March 30, 1985. A single low organ note echoes in the cavernous, lighted darkness of the Carrier Dome, as a voice says, “Hello Syracuse and the world…my name is Prince, and I have come play with you!”

Thousands of purple flower petals fall from the ceiling, sharp laser beams shoot through plumes of smoke and the curtain rises to reveal Prince And The Revolution in comic book hero silhouette, kicking in the opening bars of let’s be crazy. And fans do just that. Not just the 38,000 people in the hall, but millions more around the world who listened to one of the very first pay-per-view concerts. Recently released as a live album and Blu-ray, Prince and the Revolution: Live can yet rewire members of the Revolution into the visceral thrill of it all.

“After not seeing it for a very long time, I was like, ‘Wow, what a great band that was!'” says guitarist Wendy Melvoin. “Syracuse was kind of a ‘hit it and quit it’ show. Basically, we followed the contours of the film on stage. But its full strength is pretty obvious when you look. The energy level is on eleven all the time, from start to finish.

“There’s kind of a sweet spot when you’re on tour and you’ve been away for a few months and you’re really in high spirits,” says keyboardist Lisa Coleman. “That’s what you see. On top of that, it was a special occasion with its own appeal, being one of the first concerts broadcast worldwide.

The early days of the tour, and what drummer Robert ‘Bobby Z’ Rivkin calls “the whole purple rain era,” date back to August 1983, when Prince And The Revolution performed a hometown concert at the First Avenue Club in Minneapolis.

“We started recording the album right there, then moved on to film rehearsals, then tour rehearsals,” Rivkin explains. “Everything ran together. And there were a lot of cooks in the kitchen to make this thing as good as possible: set design, lighting, costumes, so many details to sort out. For Prince, who liked to go fast, it was frustratingly slow. But really, purple rain – the album, the film, the tour, the whole three-year saga – became this diamond because of the pressure of time.

The all-day, all-night rehearsals for the tour were reputedly grueling, with Prince setting very high standards for stamina and “you should never have your hands free” stage presence. Like he said rolling stone in 1985: “I swear to God I’m not saying this boldly, but there’s no one around who can stay awake as long as I can. Music is what keeps me awake. There will be times when I work in the studio for twenty hours and fall asleep in the chair, but I can always tell the engineer what cut I want to do.

“I loved this discipline, says Melvoin. “It made me feel like I wasn’t, excuse my language, messing around. It was really good to take him so seriously, especially at such a young age. I was only nineteen. We filmed every rehearsal we did. And there was a mixture of advice from each day that we rehearsed. Prince listened and watched and we made adjustments.

“It was part of creating a band,” Coleman explains. “I thought it was great to have that kind of work ethic because it really gives you such power when you’re on stage when you don’t have to think about what you’re playing.” Rivkin adds: “There’s an old expression: ‘The pain is temporary, but the tape is permanent’. [laughs]. Nothing in Prince’s music was disposable. Every note counted. He couldn’t stand music that wasn’t informed. So, these were excruciatingly labor-intensive, labor-intensive rehearsals – these were really doctoral courses in rock ‘n’ roll.”

When the five-piece band (including Matt Fink on keyboards and Brown Mark on bass) graduated for the first meeting of seven nights at Detroit’s Joe Louis Arena, they were, as Melvoin puts it, “a well-oiled machine. “. It was the first of 98 sold-out dates over the next six months, all transported by a convoy of 14 trucks, 10 buses, two planes and a team of 100 truckers. “We were a city on wheels,” Colman says.

But increasingly, Prince began to separate from his band, as he glimpsed a new level of fame that would rival Madonna, Michael Jackson and Bruce Springsteen to define the 1980s.

“The fact that Prince is traveling separately really started the 1999 tour,” says Rivkin. “When he was on the same bus as us, he would put on the trailer and never stop analyzing it. I remember one night he woke me up at four in the morning in my bunk and said, “You missed a cymbal on Delusional.’ So I said to his manager, ‘He’s a rock star now. Get him his own bus’ [laughs]. On the purple rain turned, he moved further away. Things got more chaotic and there was less time for camaraderie to be in the band.

“It was probably a form of self-care to become a superstar,” Melvoin believes. “The most mysterious, the most enigmatic, the most untouchable – he started to play that role. And I think his leadership encouraged that kind of behavior. It’s not that he didn’t want to be with us. It was a direct result of being busy and reaching heights that he had been goal-oriented to.

But the band reconnected with their frontman during the epic afternoon sound checks that preceded each gig.

“It was called ‘sound control’ and I think the sound guys gave us a sound, but we could go on for three or four hours,” Coleman laughs. “We would get there and just start jamming. Or Prince would already be there with a drum machine playing bass, and he would be watching us to come and fall into it.

The sound checks were also a therapeutic playground for Prince, who later said that the rehearsal built into the tour “almost gave him a nervous breakdown”.

“His agitation came out of those sound checks,” says Rivkin. “He was changing some things on the show, adding new parts, even writing new songs, all so he wouldn’t go crazy. You should also know that the next album, Around the world in one day, has already been recorded and mixed before we even started this tour. So he had already moved on before we even set foot on stage.

After the sound checks, it was, as Coleman says, “Hurry up and get ready to get back on stage.” Prince’s longtime makeup artist, Robin Lynch, had done his routine so well that she would sit him with all five band members together and move from chair to chair.

“She could do everything to us in an hour and a half,” says Melvoin. “Normally, this sort of thing takes an hour and a half per person. It has become second nature to her. We had four costumed people who were set up in black tents on either side of the stage. You would run away and they would be ready to change you. It was boom-boom-boom, and it was gone.

Once dressed, they gathered for an important pre-show ritual. Rivkin explains, “We would all gather in Prince’s dressing room, in a circle, and either he would talk or he would point at one of us and we would talk about the night. I remember everyone seemed up to the occasion and had very inspiring words against the backdrop of twenty thousand people screaming waiting for us. There was always that last moment of conviviality before going on stage. We never went there without connecting with each other first and looking each other in the eye and Prince checking us in and checking us out.

Watching the Syracuse show, you can feel that connection permeate every aspect of the magic on stage. The airtight slam of the grooves, the dynamics from whisper to scream, telepathic player interaction, choreographed dance moves, all fueled by Prince’s million watt charisma and aerobic moves.

“Prince was our bandleader,” Coleman explains. “We were inspired by him. He spoke a lot with his face. You had to rely on that a lot. Most of the time he can’t control it, so you’ve learned what he likes and what frustrates him. And then he liked the ugly funky face when you did something he liked [laughs]. It was still a good high.

“I had the best seat in the house,” Rivkin says. “I watched Prince like a hawk. You would get so much out of his moves – tempo, feel, groove.

Forty years later, the waves of Prince’s unrivaled brilliance with The Revolution are still being felt. They’re in so much pop music, from Lady Gaga to Harry Styles to Mitski. And the performances, in particular of the purple rain tour, remain benchmarks for any band that sets foot on an arena or stadium stage.

And he is still present in the lives of his former bandmates. Wendy Melvoin and Lisa Coleman, who are celebrating forty years together as a team, are currently composing music for TV shows Firefly Lane, cruel summer and Hospital.

“We still talk about him all the time,” Melvoin says. “While we’re writing, we’ll play something and we’ll both look at each other and say, ‘Prince would have loved that.’ This happens often.

Robert Rivkin, who remains active as a drummer and is also a playlist curator for major streaming services, says, “He was the most important character in my life. In death, it’s the same. It is part of my nocturnal and daytime dreams. purple rain was a beautiful time, intense and creative. Prince lived and breathed music, and we were there with him.”

Prince And The Revolution: Live is available now on album and Blu-ray via Legacy Recordings.