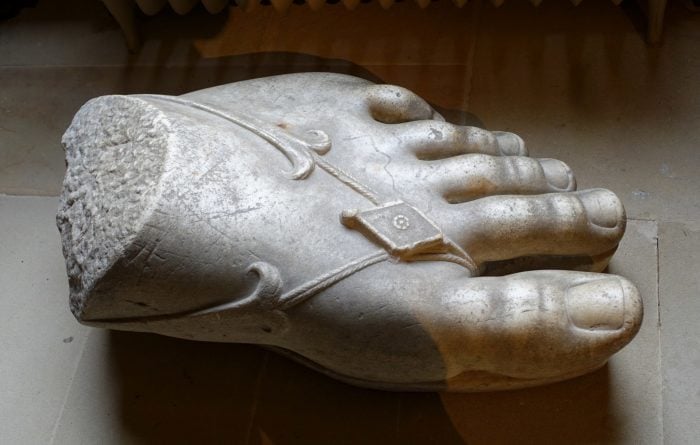 The famous “Greek foot”, commonly found on ancient Greek statues, was originally attributed to the golden ratio that ancient artists sought for their works.

Later, the “Greek toe” was considered an anthropological feature of the Greeks and other Mediterranean peoples.

According to the nomenclature of the arts, there are three types of toes: Greek, with the second longer toe; Roman, the first three being of the same length and the last two shorter; and the Egyptian, with one long big toe and the others tapering at a 45 degree angle.

In the bronze sculpture of The Boxer at rest and the Diana in Versailles marble, or Botticeli’s Birth of Venus, all subjects appear with a longer second toe.

“Morton’s toe” is a medical condition

At the turn of the 20th century, orthopedic surgeon Dudley J. Morton (1884-1960) diagnosed that the shape of the foot we call â€œGreek toeâ€ is in fact a medical problem; it was subsequently given the name Morton’s toe.

In 1927, Morton discovered the longer condition of the second toe and named it “Metatarsus Atavicus”. Further research has revealed more about the prevalence and nature of the disease.

The Greek toe is inherited and is believed to cause various musculoskeletal issues that often require proper care.

People with Morton’s toe eventually experience foot pain due to the weight distribution on the feet, especially on the first and second metatarsals.

Do most Greeks have a Greek toe?

The first studies on the â€œhuman toe formulaâ€ suggested a single-gene form of inheritance, which means that most Greeks would have a longer second toe.

However, a 1973 study by Cathleen C. Papadopoulos and Albert Damon produced opposite results. The researchers proposed a “polygenic inheritance”, which means that a trait is determined by a collection of genes.

The results of the study show that people with a longer second toe are found worldwide, constituting around 10 to 30 percent of individuals in various populations and ethnic groups.

In a study published in 2015, medical scientists Periklis Vounotrypidis and Polyxeni Noutsou studied the morphological characteristics of the foot according to classical taxonomy in the Greek population.

People from different parts of Greece with different histories with the presence of past or current symptoms in the lower extremities were used in the study.

In addition, five of the 163 subjects exhibited mosaicism, meaning that one foot had a Greek toe and the other an Egyptian toe.

In addition, 26% of men and 23% of women suffered from lower limb pain for a long time.

The Greek foot in the arts

Whatever the medical origin of the disease, the Greek foot most likely represented an ideal of beauty in ancient times, even a divine trait as seen in statues of deities.

The ancient Greeks attached great importance to Gold number, as seen in almost all works of Hellenistic art.

This geometric concept is expressed in nature in the veins of leaves or in the feathers of birds. Parts of the Acropolis design also present this connection.

The mathematician Euclid (4th-3rd century BC) is credited with being the first to mention the golden ratio, and divine proportions have fascinated scholars for centuries since that time.

Renaissance artists used the golden ratio for harmony, balance, and aesthetic perfection, and architects also used it in the design of their buildings.