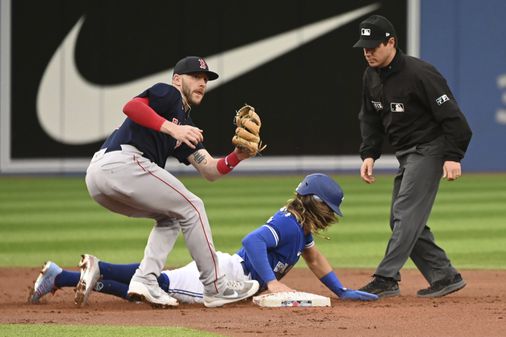 The Red Sox mandated Trevor Story to get vaccinated before signing, and the infielder has no regrets saying yes

TORONTO — The Red Sox are without an outfielder Jarren Duran and right-handed Tanner Houck, both placed on the shortlist due to their unvaccinated status. Three months ago, the Red Sox wanted to make sure it wouldn’t be the same for Trevor’s Story.

As Story neared a deal on his six-year, $140 million contract in March, the Sox said Story needed to get a COVID-19 shot. It’s a stance the team took in large part because they wanted to ensure he would be available for all games in Canada (which requires visitors to be vaccinated), including any games in Canada. post-season.

The Sox do not have a set policy requiring vaccination, but all other players the Sox had signed by that time from spring training were, and the team wanted to avoid a scenario in which a player potentially pivot would be unavailable for crucial games. against a key opponent in the division.

An email newsletter about all the baseball from Red Sox reporters around the Globe, delivered to your inbox on weekdays during the season.

Ultimately, Story agreed to get vaccinated out of a desire to be available. As he prepared to face the Blue Jays at Rogers Center on Monday, Story felt his decision was the right one.

“For me, it’s a very personal decision, whichever way you want to decide. But at the end of the day, that’s what had to be done — play these games in Canada. We obviously know how difficult this division is. Every game matters,” Story said. “So here we are.”

The second baseman suggested it would have been difficult to be away from the team for those games, especially with the Red Sox in the midst of one of their hottest spells in 20 years.

Garret Whitlock – on the injured list since June 10 with a sprained right hip – kicked off a bullpen session in Toronto. He will throw a mound again on Friday in Chicago and will also participate in field drills in an effort to stress the injured area.

“It went well,” the Sox manager said Alex Cora. “I think [Friday’s fielding drills are] the most important thing, actually, for him is to move around and see how he feels and we’ll decide what we do after that.

left handed Chris Sale kicked off a bullpen session in Fort Myers on Monday morning and will travel to Double-A Portland before departing Thursday, Cora said. Meanwhile, left-handed Josh Taylor will make a one-round appearance in rehab with Portland on Tuesday. While the reliever has made appearances in the game every other day, Cora said the Sox will likely want him to progress to the point where he pitches on consecutive days before activating him.

“It’s too early to start thinking about four southpaws in the bullpen,” Cora said. “Let’s prep it, get it back healthy, and the front office will do what it does.”

Nate Eovaldi – on the injured list since June 10 with lower back pain – played on Monday and could start a bullpen session on Wednesday. outfielder Kike Hernandez (hip) started throwing, but still not swinging or taking fly balls.

According to the farm manager Brian Abraham, Triston Casas started swinging a bat again on Monday. The second Red Sox prospect, out since May 17 with a sprained right ankle, is in rehab in Fort Myers. Due to the amount of stress the 6-foot-5, 260-pound slugger puts on his landing foot, the team had waited until he could swing without pain before having him try again. . . right-handed Bryan Mata will pitch for Portland on Tuesday as he returns from Tommy John surgery in April 2021. The 23-year-old pitcher made four rehab starts, the last three with High-A Greenville, before being activated from the roster casualties with the aim of returning to higher levels. . . right-handed Thad Wardout since undergoing Tommy John surgery last June, hosted a mock game at the team’s spring training complex in Fort Myers over the weekend and could begin a rehab assignment as soon as this week.