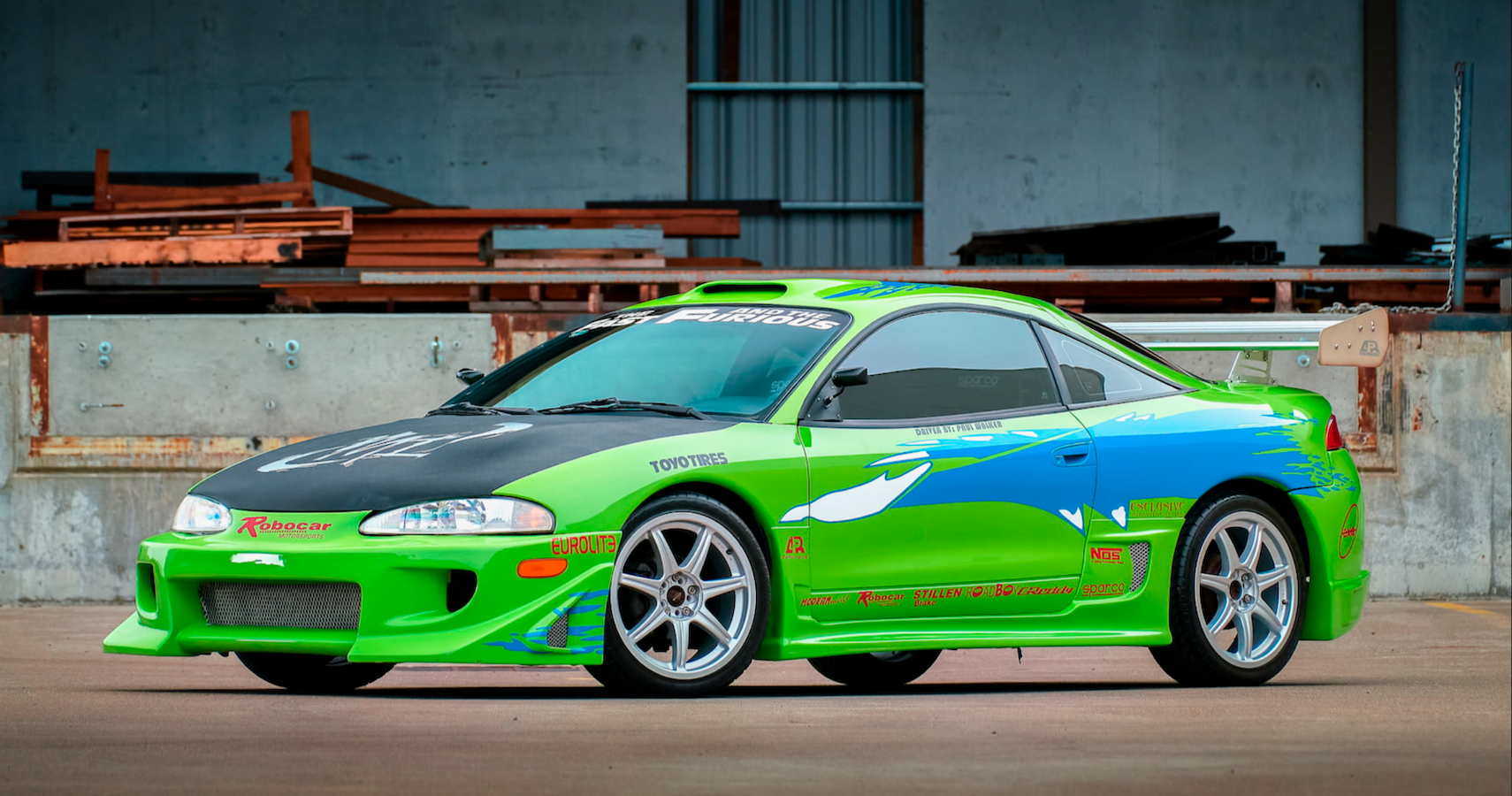 Here we take an in-depth look at the custom 1995 Mitsubishi Eclipse driven by Paul Walker’s character, Brian O’Conner, in 2001. The fast and the furious film. Of course, the car did not leave the factory like that. Customization was the work of Diamond-Star Motors, a Mitsubishi/Chrysler automobile manufacturing joint venture. They named it Diamond-Star in reference to Mitsubishi three diamonds and the Chrysler Pentastar. Notably, Diamond-Star is now Mitsubishi Motor Manufacturing of America, Inc (MMMA).

Back to Brian O’Connor’s Eclipse, we’re not surprised Paul Walker connected cars are commanding furious price tags on the market. Take this 1995 Mitsubishi Eclipse, for example. Can you believe this low birth 2nd gen Eclipse sold for $170,500 at a Mecum auction in January 2022, over 20 years after playing a minor role in the movie Fast and Furious?

Our point here is that you can get this same car in excellent overall condition for around $7,000. But when you come up with a slogan that says, “Featured in ‘The Fast and the Furious“, you’ll have people bidding well above the average price. Here’s what you need to know about this iconic movie car.

Related: Here’s Why The 1996 Mitsubishi Eclipse GSX Was Special

Brian O’Conner’s 1995 Eclipse fell into second generation models which shared the platform and parts with the rebadged captive imports Eagle Talon and Plymouth Laser. That’s because Mitsubishi built the 1st and 2nd generation Eclipse under the Diamond-Star Mitsubishi-Chrysler automotive manufacturing partnership. Mitsubishi said the Eclipse was named after an undefeated 18th-century English racehorse that won 26 races.

The 2nd generation Eclipse received a facelift in 1994 for the 1995 model year. The changes – both cosmetic and powertrain – were aimed at entering a wider market, not moving away from the original target market of the 1st generation Eclipse. This generation produced the 1996 Eclipse Spyder convertible variant with GS and GS-T trim levels. The Spyder GS-T version was fitted with a turbocharged 2.0-liter 16-valve DOHC 4G63 (Mitsubishi Sirius) engine that could develop 210 horsepower and 214 lb-ft of torque.

The Spyder GS-Ts were the only turbocharged Eclipses while the others, including Brian O’Conner’s 1995 Mitsubishi Eclipse, were powered by two different naturally aspirated inline-4s (a Chrysler 2.0-litre 140hp 420A engine and a 2.4 liter 141-hp AG64 Mitsubishi Sirius engine), depending on market. Specifically, Brian was the base model 1995 Eclipse RS powered by the Chrysler 420a 2.0-liter DOHC 16-valve engine rated at 140 hp with 130 lb-ft of torque.

This was the US version of the Eclipse offered with RS and GS trim. Interestingly, the Eclipse which ended up being one of Paul Walker’s rides in the movie Fast and Furious wasn’t even a top of the line 2nd gen Eclipse. That honor goes to the GS-T turbo and, of course, the AWD GSX.

So the 140-hp Eclipse RS could never have stood a chance against Torretto’s Mazda RX-7, despite DSM customization using 2001 technology and parts. Either way, this particular car has an interesting story to tell.

Related: These are the best mods for your Mitsubishi Eclipse GSX

As always, Craig Lieberman is an excellent and reliable source for all things “Fast and Furious,” especially cars that have made appearances — big and small — in the movies. This is especially important because even Lieberman admits most of the information circulating about this car – Brian’s 1995 (1996, actually) Mitsubishi Eclipse is not factual.

Notably, there were actually six Eclipses involved in the filming of the film, including the hero’s car painted bright green and laden with decals and graphics (Hero’s Car 1). By saying hero cars, we are referring to the main car used when filming scenes involving the main actors (not for the stunt people). Hero cars have the paint job, interior, engine mods, etc.

So the hero Eclipse is the one Brian drove earlier in the movie, trying to get to grips with the car in the Dodger Stadium parking lot. Yeah, we watched it redline the engine, with the speedometer going over 150 mph. But as Lieberman confirms, it was actually one of the few authentic aspects of the film’s car. Most of the other stuff about it – features, powertrain and events – was, of course, as fake as it gets.

At least we enjoyed seeing the car suddenly do a huge spin before stopping inches from the roadside barrier when testing the Dodger Stadium parking lot. John Lapid is the owner and builder of the #1 Eclipse hero car. Lapid showed up with the silver-painted car at the F&F casting call. It wasn’t the ideal Eclipse (in terms of performance), but it was the only Eclipse to appear, so Lieberman took the plunge.

They just had to spruce it up to look like a high-powered tuner car that could take on Torreto’s (Vin Diesel) RX-7. A glaring example is the fake nitrous kit. The producers relied heavily on the fact that most moviegoers didn’t know the difference. But the movie ended up attracting a lot of gearheads, the kind of people who know that a 3-stage nitrous kit is great for big-engined race cars or big turbo cars.

More so, Brian’s Mitsubishi Eclipse was neither turbo nor AWD. So even a hundred-stage nitrous kit couldn’t have helped its course. In other words, only in a movie could the Eclipse challenge the RX-7. According to Lieberman, they just put the car through a basic bolt-on mod, at the end of which it got an extra 10 horsepower at best. Today, Brian’s Eclipse is one of the most beloved cars in the franchise as well as one of the most reproduced, with approximately 50 known replicas worldwide.