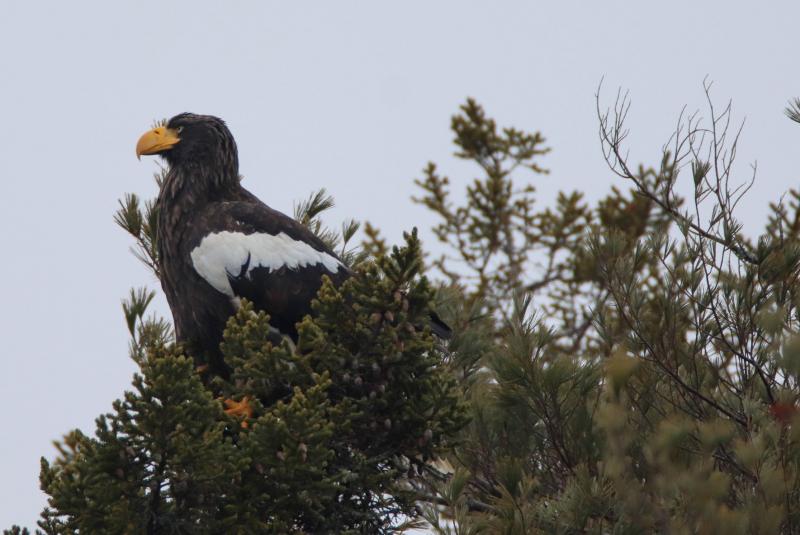 Steller’s sea eagle has disappeared. As of this writing, the bird had not been seen since Jan. 24, when it returned to Boothbay Harbor and Southport Island after a few days in Pemaquid Harbor.

Of course, many people still search for it daily. But how far from the last place where he was seen should they look? This bird is clearly very unpredictable considering it’s half a world away from where its fellow sea eagles currently are, so it’s probably presumptuous for anyone to guess what it might be up to.

But we found a paper published in 2003 that reported the results of a study in which 24 Steller’s sea eagles were tracked, with satellite transmitters, from where they were reared in and around the Kamchatka Peninsula in Russia. The researchers found that the birds made their migratory movements to their wintering grounds from September to December. All made stops along the way that lasted from four to twenty-four days. Once on the wintering grounds, the authors estimated the size of the wintering range at a maximum of about 2,200 square kilometers.

Imagine that the bird has settled in Boothbay Harbor as the center of its wintering area. Based on the results of the 2003 survey, we would expect a circle extending to Friendship in the east, Isle of Orr in the west, and up to Richmond and Damariscotta would cover an area the size of the typical wintering range of sea eagles. Even many parts of this relatively circumscribed area would be difficult or impossible to access and scan effectively. The bird might hang around somewhere a few miles from the many birdwatchers agonizing to catch a glimpse of it, but essentially invisible to them for all practical purposes.

Not so long ago, all studies of bird movements had to be done in much the same way as birdwatchers attempt to track this amazing sea eagle. Marked birds can be searched for but are usually only seen again occasionally so that a very rough map of movements and history can be pieced together. When we lived in Ithaca, New York, we remember well the many hours we spent trying to read the number and letter combinations on the collars that had been placed on Canada geese to learn more about their movements. and their survival. Bird photographers are sometimes able to get high enough resolution photos of leg rings on larger birds to read the numbers and get a data point or two about the movements and longevity of the banded bird. Researchers capture banded or otherwise marked birds in mist nets, and of course birds with leg bands are found dead or harvested by hunters, providing another source of occasional information.

All of these methods provide only a rough idea of ​​the ecology of bird movement because, much like our sea eagle, we do not know where the bird was between the known occasional points of its appearance.

This is why new technologies that send regular signals to radio or cell towers or satellites are so revolutionary for better understanding the movements and ecology of birds. We’ve written in previous columns about some of the interesting discoveries that have been made using this technology, including tracking snowy owls through Project Snowstorm, the 38-hour nonstop journey of a great blue heron of Maine and night flights of shorebirds from James Bay to the coast of Maine.

All of this new research is helping people understand how intertwined the whole world is. This means we need conservation work to protect bird habitat from north to south and everywhere in between. The land protection we do right here in Maine is an essential contribution to biodiversity around the world through which birds and other animals make breathtaking migrations.

Jeffrey V. Wells, Ph.D., is a Fellow of the Cornell Lab of Ornithology and Vice President of Boreal Conservation for National Audubon. Dr. Wells is one of the nation’s leading bird experts and conservation biologists and author of “Ornithologists Conservation Handbook.” Her grandfather, the late John Chase, was a columnist for the Boothbay Register for many years. Allison Childs Wells, formerly of the Cornell Lab of Ornithology, is senior director of the Maine Natural Resources Council, a statewide nonprofit working to protect nature in Maine. Both are widely published natural history writers and are the authors of the popular books, “Maine’s Favorite Birds” (Tilbury House) and “Birds of Aruba, Bonaire, and Curacao: A Site and Field Guide,” (Cornell University Press ).