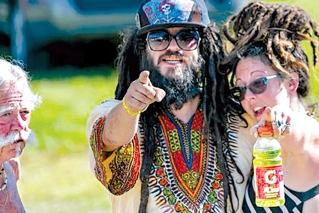 A lineup of national touring acts combined with local talent is set to entertain a camping weekend at Freedom Field in Harmony May 20-22 during the 27th annual Sprout Festival.

Germination is a family music and arts festival for all ages started decades ago by Donnie Christian. According to Chelsea Morang, who attends the event, Christian was looking for a group to take over the organization of this festival and other music festivals held at Freedom Field, 75 Carson Hill Road in Harmony.

“He recently found a group to carry on his legacy so that more events can happen in this magical place,” Morang explains. “Sprouting will be the first big festival we all put our hearts and souls into.”

Germination’s multi-genre music lineup will offer a bit of everything according to Morang.

“We have jam bands but also rock and roll, jazz fusion, hip-hop, one-man act, looping and DJs. There’s a good variety to speak to everyone,” she says.

National tours to appear at Germination include Next to led by Richard James of Pink Talking Fish and Lyle Brewer. Dogs in a pile is a psych-fusion funk rock band from Asbury Park, New Jersey. Beau Sasser & the Sensi All-Stars is an organ driven funk rock band. Jabbawaukee is a Rhode Island-based psych-funk-jam quartet. Higher Education, formed in College Park, Maryland, plays psychedelic roots rock. Leon Trout is a jam-funk-psych band from Boston.

Stephen Lewis and the BIG Band of Fun are an energetic funk and hip-hop group from New Brunswick who will return to Germination when the festival officially kicks off Friday afternoon starting at 2:30 p.m.

A children’s tent will feature instructors teaching children how to spin the poi. “It’s a form of slow dance where you spin balls on a string,” Morang explains. “We’ll teach them how to make their own so they can go out and have fun.”

Artists will create live visual art and provide demonstrations throughout the weekend, according to Morang.

Cannabis educators and caregivers will be on hand to provide information and answer any questions.

Vendors will also be on hand offering a variety of tie-dye clothing, jewelry and tapestries.

Three food vendors will also be set up at Freedom Field for the weekend.

A full weekend pass to Germination, including overnight camping, will cost $120 at the gate. Mention The Maine Edge upon arrival for a savings of $10. Day passes will be available for $60.

Sprouting is a dog-friendly event. There will be a $20 charge for each friendly dog ​​on leash. Dogs must stay with their owners at all times and owners must pick up their dogs.

Sprouting is a BYOB event, but no glass containers are allowed; cans and plastic only.

For those who prefer to retire to their tent or motorhome earlier, there will be designated quiet spots on the grounds.

There is no charge to bring a motorhome to Germination and organizers say they will provide electricity and water hookups.

Chelsea Morang says there’s a special vibe at Freedom Field. She met her husband James (bassist with Merther) there; they later married there.

“I have a passion for this place,” she says. “There is real magic in the air here. I think most people come to enjoy the sunny outdoor vibe and listen to great music, see art, and celebrate being together. The terrain itself is flat and easy to maneuver. My stepdad never misses it and he’s over 80. It’s one of his favorite places. He installs his lawn chair in front of the stage and enjoys the sun.

Organizers say they are planning other festivals for Freedom Field later this year, including a bluegrass festival, a jam band festival and a harvest festival in the fall.

Book Review: “Azad Nagar: The Story of a 21st Century Slave Revolt” by Laura T. Murphy Asks Questions About the Price of Freedom