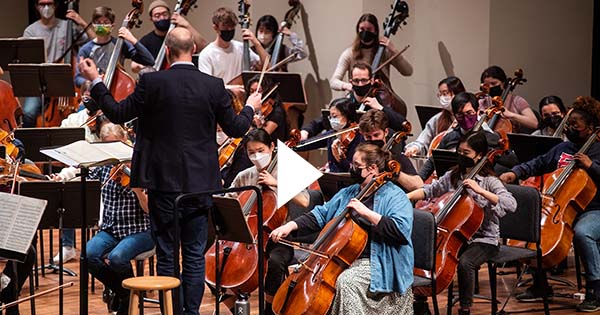 Boston’s Symphony Hall is a big venue, but that doesn’t seem like it when you’re performing onstage, says flautist and music school student Matthew Lee.

“I don’t know what it is, but you feel like the audience is kind of above you all the time. It’s a little nerve-wracking at first,” Lee (CFA’20,’25) said with a smile.

“When you are in the audience, the room is very big and you have the impression space outsays Lee, who was completing a performance degree in the spring of 2019 when they first performed there with the BU Wind Ensemble. “But sitting on stage is a whole different experience. The first thing I noticed is that the audience feels very close to you. That space is just eliminated.

“You have to put yourself in the right headspace, take it all in, acknowledge it,” says Lee, now a graduate student in a doctorate in musical arts. “And then try to just focus on the task at hand, which is to play a good gig.”

Lee will return to Symphony Hall on April 5 when the College of Fine Arts School of Music performs its annual concert at the legendary venue after a two-year hiatus caused by a pandemic. This year’s event will also kick off the School of Music’s 150th anniversary celebration.

The BU Symphony Orchestra, conducted by CFA Director of Orchestral Activities James Burton, practicing at the Tsai Performance Center for their April 5 concert at Symphony Hall. Pictures of Cydney Scott

James Burton, BU’s Director of Orchestral Activities and CFA Lecturer in Music (and Chorus Director of the Boston Symphony Orchestra), will lead the BU Symphony Orchestra and Symphony Choir in a performance of the German Requiem from Brahms with choir director Mariah Wilson, a CFA music lecturer. David Martins, CFA lecturer in music and director of the BU Wind Ensemble, will conduct the ensemble performing the score of The Cowboys by John Williams (hon. ’85) (from the film The cowboy and the girl) and Our new day has begun by Omar Thomas.

Lee will be the Brahms’ principal flautist and will also perform with the wind ensemble on the Williams piece.

Registration for the free Symphony Hall event is closed, but a limited number of last-minute walk-in tickets will be available at the door just before the concert, which will also be streamed live.

Worthy of a year-long celebration

“The reach, the impact of the School of Music on the world of music is profound,” says Harvey Young, dean of the College of Fine Arts and professor of drama.

“If you combine School of Music and BU Tanglewood Institute alumni, we have alumni in every major symphony orchestra in the United States,” says Young, “from Dallas to San Francisco to Philadelphia to Chicago, and of course we have dozens of Boston Symphony Orchestra and Boston Pops members, a decent number of whom continue to serve on the faculty.

But it’s more than that, says Young, who is also an English professor at the College of Arts & Sciences. The anniversary is a milestone in the history of music education in the United States – BU’s was the first degree-granting music school in the country, although there were other music conservatories in the ‘era. “The study of music in this country started with BU, and that’s a message we’re going to spread in a bold and meaningful way,” he says.

But don’t expect the year-round celebration to be an archival feast of past triumphs. More like a snapshot of an institution as it pivots into the future.

“This year’s celebration is this: we are all giving ourselves the opportunity to rethink what we do,” says Gregory Melchor-Barz, Director of the School of Music and Professor of Music, Musicology/Ethnomusicology.

“The past three years have been tough for anyone with a musical bent,” he says, “learning not to be in community with other people, choirs having to sing on a Zoom screen, people playing chamber music who are not in the same room. We all had to learn new skills. And there is no turning back. We’re taking what we’ve learned over the past three years, using some of those skills, and learning to be more compassionate and caring for each other, appreciating the process rather than just the product.

The school is also forward-looking and asks big, tough questions about the past, “uncovers open ideas about anti-racism,” and takes diversity, equity, and inclusion to heart, Melchor-Barz says. “We decided to listen to our students, who really wanted us to focus on really critical issues in American education, especially in arts education, issues that address anti-racism both in the curriculum and the musical repertoires we play at the School of Music.”

The School of Music’s annual performances at Symphony Hall and Carnegie Hall next spring are just the highlights of this year’s activities. The next 12 months will be filled with concerts and recitals as well as symposia and conferences, looking to the future as well as the past.

Perhaps ironically, COVID has helped the whole school discover a new way to expand their audience.

“Our experience during COVID of relying heavily on live streaming our concerts to ensure people will hear what we’re doing has led to a new way for us to reach outside of the BU campus,” says Melchor Barz. “Thousands of people have listened to our live broadcasts. We’re reaching more people than we’ve ever been able to reach, and that’s something we’ll continue to do over the coming year. We’ve invested in equipment, time and labor, and we’re not going back. We have people from all over the world, from Asia and Turkey.

The school also invites guests to help explore the question of what it means to “be a music conservatory in its 150 seconds,” he says. A public conversation at WBUR’s CitySpace in the fall will pair Melchor-Barz with Anthony Tommasini (CFA’82), the recently retired New York Times classical music critic. Lucia Lin, CFA music teacher, violin, will perform at the same venue next spring with the composer Gabriela Lena Frank, who will be in residence at BU; the two collaborated to commission more violin works from underrepresented composers.

Melchor-Barz is also trying to broaden the international audience for BU Music Scholarships, with professors of musicology and ethnomusicology traveling to BU’s London Study Abroad. program of a major symposium next March with invited researchers from all over Europe.

Of course, the year will also include special events here on campus, including a celebration of 100 years of BU groups during Family and Friends Weekend at BU, October 21-23. Many of the band members aren’t music school students, “but they make music and fill the campus with joy, and they’re all my people,” Melchor-Barz says.

“Our marching band outlived our football team,” Young says with a smile. “Having our bands at every game and event is really a sign of how much they continue that role of being the heartbeat – the soundtrack – that element that forms the campus community.”

The year-long celebration will conclude in the spring of 2023 at Symphony Hall, with a concert marking the retirement of wind conductor Martins, who Melchor-Barz says “is part of the heart and soul of this institution to a degree difficult to imagine”. .” Martins had planned to retire before the current school year, but agreed to stay on for two more to help Melchor-Barz begin his tenure as principal. The repertoire for this concert is still under discussion, but Melchor-Barz promises “something fantastic” to mark the end of the year-long events.

“We’re thinking where we’re going to be next year and where we’re going to be in 10 years, where do we want students to be, how can we get students into the pipeline so they can take over in 10 years. , ” he says. “It’s part of my commitment to the Diversity, Equity and Inclusion initiative, to convince us all that we need to listen to students differently, to be more open to the way people are musically in the world. And it’s starting to happen. »

Performances by the Boston University Wind Ensemble, Symphony Orchestra and Symphonic Chorus. Pre-concert registration is no longer available. Reserved tickets will be available for pick-up beginning at 7 p.m. Tuesday, April 5 at the Symphony Hall BU table (not the BSO box office) inside the Mass Ave entrance. A limited number of walk-in tickets will be available on a first-come, first-served basis at the BU table from 7:45 p.m.