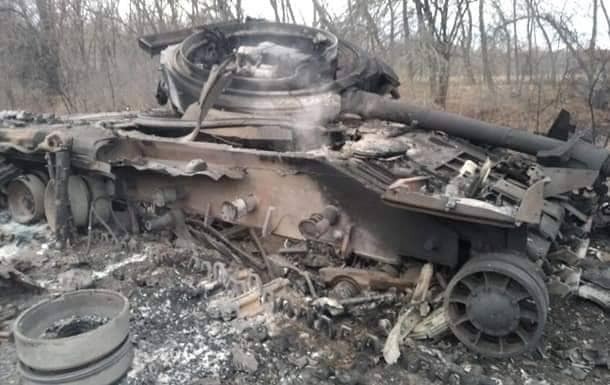 Then Russia took this inadequate invasion force and attacked from four different axes: kyiv in the north, Kharkiv/Sumi in the northeast, Donbass in the east and Crimea in the south. We can assume that Russia didn’t spread an equal force across all four axes, but generic calculations would quickly show that 7-8,000 troops per axis was woefully insufficient, and Russia further diluted that combat strength by dividing each of these axes into several attack sections.

So even before we get to logistics, which is Russia’s other big failure, they were already catastrophically depleted. This is why Russia has captured only one city of any significant size so far, and even that one – Kherson – appears to be under threat of liberation. The hope, of course, was that the multi-directional assault would shock and intimidate Ukraine into a quick surrender, literally overwhelmed on all sides. Instead…every side got bogged down. Things are so bad for Russia that the Institute for the Study of War said today that Russia had lost this phase of the war, and it was time to stop or go back to the plank to drawing. And to be clear, ISW, a defense thinker, hasn’t always been so pessimistic about Russia’s chances.

Ukrainian forces defeated the first Russian campaign of this war. This campaign aimed to conduct airborne and mechanized operations to seize kyiv, Kharkiv, Odessa and other major Ukrainian cities in order to force a change of government in Ukraine. This campaign has culminated. Russian forces continue to make limited advances in parts of the theater, but are highly unlikely to be able to seize their objectives in this manner. The doctrinally sound Russian response to this situation would be to end this campaign, accept a possibly long operational pause, develop the plan for a new campaign, build up resources for this new campaign and launch it when the resources and other conditions will be ready. The Russian army has not yet adopted this approach. Instead, he continues to nurture small collections of reinforcements in an ongoing effort to keep the current campaign alive. We believe this effort will fail.

Yesterday we were wondering if Ukraine had made any significant battlefield gains around Kherson in the south and northwest of kyiv in the north. We are still awaiting confirmation, which will be posted here at some point today. Fingers crossed for good news, although sifting through Twitter and Telegram I couldn’t find any video of Ukrainian forces holding all this new territory. From now on, we can be content with knowing that the city of Mykolaiv is out of range of most Russian artillery pieces.

Meanwhile, Russia’s approach to reinforcements is not to build up an operational reserve that can then break through weakened Ukrainian lines wherever they arise (which, at this point, would be the Donbass front ). Instead, they double the current smash:

The Russian military continues to engage small groups of reinforcements in localized combat rather than concentrating them to launch new large-scale operations.

In other words, Russia is replacing combat losses in all of its multiple attack vectors, instead of trying to solve one of its main problems: the fact that its forces are overstretched. You see this in all the summary updates: Kyiv? Russia is on an operational pause, building up its forces. Kharkov? Operational break while he builds up his forces. Sumy? Same thing. Kherson? Yeah. Russia East move to Mariupol, which should soon fall, and a little on this Donbass front. But why not engage all these reinforcements in Mariupol, bring it down quickly, and then take these newly liberated forces to break through the positions prepared by Ukraine on the eastern Donbass front? But no, just more dilution.

Meanwhile, Ukraine is bleeding Russia, one paper-cut ambush at a time.

Why do people keep insisting that Russia fend for itself and adjust its strategy according to the realities on the ground. Russia has shown no ability to learn from mistakes and try new things. Are they too scattered? Awesome! They continue to dilute this force with a piecemeal approach to reinforcements.

But what about that no-fly zone, some of you might still be wondering. Can’t Russia still bomb Mykolaiv and other cities? Sure! But strangely, it becomes a much rarer event.

Russia’s missile/rocket (ground) reserve is clearly depleting, as tactical missile assaults from Belarus escalate to single digits a day. You would think they would make up for it with airstrikes, but even those are running out. For the past three days (March 16-18), Russia has struggled to tinker 20 outputs. Now remember that these numbers are only for attacks from Belarus, so it doesn’t count strikes from Russia proper or Donbass. But the total number of missile strikes is looking anemic:

There was a lot of fighting yesterday, given the tallies of Russian equipment destroyed yesterday. I count 68 confirmed Russian equipment losses on March 19, for a total of 1,610. Last weekend it was 1,000. And a grim milestone for Russia:

#UkraineWar: It is now visually confirmed that the Russian army has lost over 250 tanks since it began its invasion of Ukraine on February 24.

Fun fact, Ukraine has captured more confirmed tanks (106) than it has confirmed losses (67). By now we should have a better idea of ​​what all this death and destruction has bought on both sides of the war.

Did you know? Sidharth Malhotra was to star in the movie “Fashion”