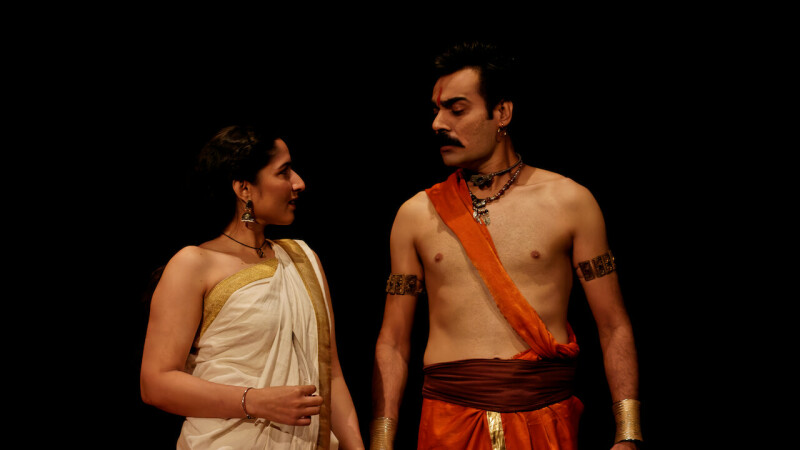 Review: Betaali Prem Katha, a fascinating adaptation of an Indian folk story, is definitely not for children

The play is currently running quietly at NAPA in Karachi and is well worth the price of admission.

A tale of demons, deceit, and carnal desires unfolds quietly at the National Academy of Performing Arts (NAPA) in Karachi…even though it shouldn’t have been (more on that in a minute).

Embracing the minimalism of its story by dividing the sets between lights, shadows and meters of blood-red, brown and black drapes, Betaali Prem Kathadirected and written by Fawad Khan, is a fascinating adaptation of one of the Indian mythological folklore stories Vetala Panchavimshati, simplified to Baital-Pachisi – the 25 Tales of Baital, or Vikram-Betaal.

Like many surviving folklores that have been retconned and revamped for who knows how long, the premise has the legendary king Vikramaditya carrying a demon-like entity called Betaal on his back through ominous woods while he is told a story. Betaal, like others of his ilk, thrives on mischief. He is hanged upside down from a bare tree in the middle of the mass graves of a village in ruins; however, unlike his evil brethren, he possesses (no pun intended), a shrewd attitude.

The stories he tells Vikramaditya – though mostly superficially with an anticlimactic climax – have a confusing riddle at the end; a Vikramaditya is always able to respond. “Betaali,” by the way, is a play on the words Betaal, the demon, and Betaali, which pretty much means headless and tailless.

Betaali Prem Katha, however, deliberately leaves the interpretation and answers of the questions open to the public if they wish. The end of the play has a macabre epilogue on a very open question; it plays like a mid-credit scene from a Marvel movie.

One logic that lends credence to this decision of open deliberation, I suppose, is the absence of Vikramaditya, the voice of reason and the overt representation of the public. It is hinted that this particular story takes place live, years after Vikramaditya’s passing.

Freed from Vikramaditya’s shadow, which might have given it a more palatable tone – or, perhaps, in my mind, the idea of ​​’Vikram Betaal’ still reminds me of the family vibe of the Doordarshan adaptation that the noble-looking star of Arun Govil as Vikramaditya – Fawad’s version intensifies the evilness of the original story, turning the narrative into a human drama of identity crisis and bisexual philandering.

Yes, you read that right, this room is not for children.

The plot tells the sexually charged story of a princess, Chandra Prabha (Erum Basheer), falling in love with a Brahmin named Prem (Raheel Siddiqui), who receives an enchanted “gutka” that will transform him into a woman, that is. -to say. Prem-Lata (Shabana Faizan), so he can infiltrate the royal household as one of the princesses’ attendants, and rejoice under the king’s nose.

In one of Fawad’s many twists in this version, a minister (Fahad), whose sexual urges are triggered by Prem-Lata’s flirtations, begs the king to give him the girl in marriage.

The drama escalates when Sita (Ifrah Khalid), the minister’s wife – now living in a miserable, sexless marriage – learns of Prem’s enchantment and starts her own business while her husband is away.

There is a preamble about staying away from Prem-Nagar – that’s the name of the country, by the way – whose inhabitants can unreservedly be called repressed deviants. When sexuality is prominent in the story – how can it not be? It’s everywhere – the depiction of adultery is masked by flippant, flippant script that carries a seemingly family-friendly vibe. The emphasis is on the word “apparently”.

Now, I might have liked to put a bit more emphasis on Hindi in the dialogues – there is a bit of Urdu heard, perhaps for the benefit of the audience – but there is no doubt that the play engages you from the start and runs faster than most Pakistani plays and feature films. In fact, at the end of this two-hour long story, you might wish it was a little longer.

Fawad’s story raises many questions about the voluntary gender changes one undertakes, repressed sexuality, and the aftermath and complications of his release. A nagging question that Prem/Prem-Lata faces time and time again is the incipient confusion of his soul’s sexual orientation as he transforms back and forth between male and female. At the disconcerting climax – disconcerting in a good way – Prem almost loses his mind wondering who he is inside.

The audience laughs out loud at their dilemma – and they should. The tone of the piece is airy with uniformly excellent performances from the ensemble cast. The actors play well into their characters, wearing accurate and revealing shades that would differentiate their posture and beliefs to the audience.

Fawad’s piece also tones down the theatrics, with just enough creative decisions not to overwhelm the audience. Onstage colors, for example, are pops of red and black; when seen in context, they are emblematic of the darkness and dangers of the character’s predilections and eventual actions.

Like Betaal (Sunil Shanker, who also plays the king and another role), who acrobatizes high in the air using long red curtains, lit by unfiltered light from below – we can’t help but d applauding his upper body strength – the audience is a willing spectator in a dastardly tale of repercussions, eager to consume the entertainment generated by the stupidities of these characters’ actions. Witnessing their entanglements is worth the price of admission, and more.

Written and directed by Fawad Khan, with music by Ahsan Bari and Bhagat Bhoora Lal, Betaali Prem Katha runs at NAPA’s Zia Mohyeddin Theater daily through August 21. Show times are 8 p.m. on August 19 and 4 p.m. and 8 p.m. on August 20 and 21.