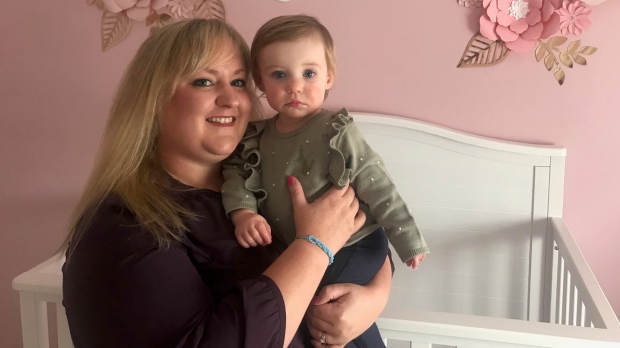 Postpartum depression: A mother from NS shares his story to help others

Up to one in five new mothers suffer from some type of perinatal mood and anxiety disorder – conditions that affect both mother and baby.

Women of all cultures, age groups and income levels face these struggles, and many suffer in silence.

But a Nova Scotia mother shares her own story in hopes of changing that.

“I had these really intense thoughts about, you know, I hate this. I’m not good at this, I’m not cut out for this,” says Andrea Jerrett, who gave birth to her daughter, Amelia, in January 2021.

She first played the thoughts as exhaustion. But a month after Amelia was born, Jerrett was still crying every day. She felt sad and anxious and could not sleep. Her husband noticed that she was not well.

“I don’t think I wanted to admit it until then, but having someone say it out loud to me, I think it made me think and say no, I’m not going to. fine,” she said.

Jerrett is the Senior Digital Producer for CTV Atlantic’s web team. She works behind the camera, but on World Maternal Mental Health Day she was forced to walk past it.

“I feel like I was hit by a train that I never saw coming and no one warned me about,” she says of her postpartum journey.

“I think if more women would talk about these experiences they have, it would help other people.”

Jerrett sought help from her nurse practitioner and the reproductive mental health team at the IWK Health Center.

She was diagnosed with severe postpartum depression and postpartum anxiety.

“Half of all cases of so-called postpartum depression actually start during pregnancy. We call this peripartum depression. And so it happens in about 10 to 15 percent of people who are pregnant or postpartum,” says Dr. Tanya Tulipan, perinatal psychiatrist with the IWK’s Reproductive Mental Health Services team.

According to Dr. Tulipan, about 20% of patients suffer from perinatal anxiety and 1 in 1,000 mothers suffer from postpartum psychosis, which is sometimes preventable and treatable.

Flora Babakhani took her own life earlier this year after suffering from postpartum psychosis. Her story encouraged women to start Flora’s Walk to raise awareness and funds. A group walked through Point Pleasant Park on Wednesday to mark World Maternal Mental Health Day and raise more than $2,600.

“You’re not alone if this is something that’s happened to you and what you’re going through is treatable,” says Katie Van Patter, who organized the march.

Jerrett’s treatment involves therapy and medication. She says it took eight months to find a drug that worked for her and nine months to feel like herself again.

She hopes sharing her story will help other parents facing similar challenges.

“I hope that’s what I can do. I hope that by sharing my story, I can help another mom who is going through this ordeal right now and who may be feeling alone and not sure what to do.

Jerrett also hopes talking about her postpartum experience will encourage others to do the same.

Poll Shows Opposition to Abortion Ban; 11 points ahead for Abbott over Beto | News