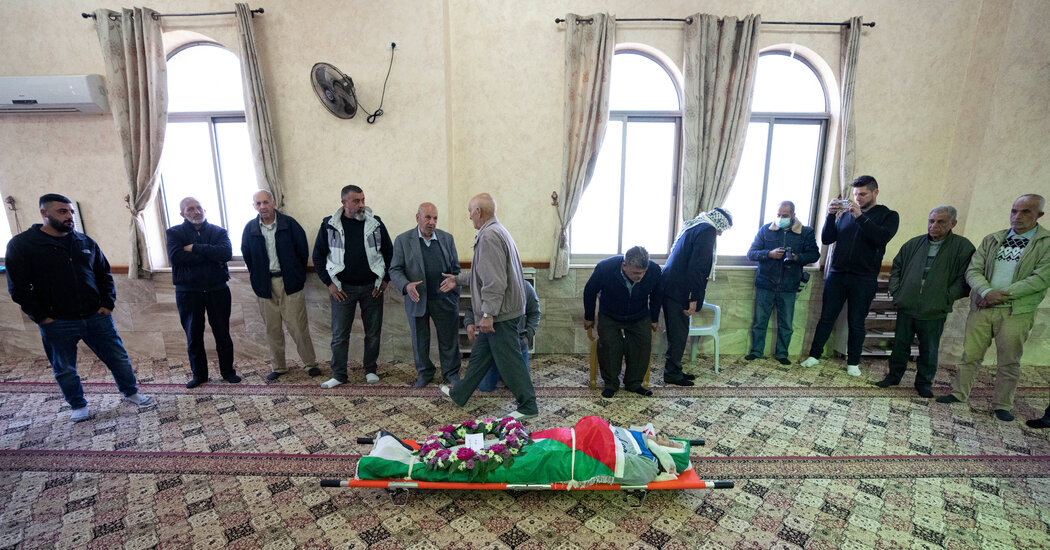 JERUSALEM — A 78-year-old Palestinian American died this month of a stress-induced heart attack brought on by injuries sustained while in the custody of Israeli soldiers, according to an autopsy report obtained by the New York Times Wednesday.

The death has sparked renewed attention on Israel from its closest allies in Washington, who have called for “clarification” and a full investigation into the circumstances surrounding the death of the man, Omar Abdelmajed Assad.

Mr. Assad suffered from pre-existing heart conditions and was detained by dozens of Israeli soldiers for about an hour on January 12 in his village of Jiljilya in the occupied West Bank. He was blindfolded, with his hands tied behind his back and lying on the ground, witnesses said, conditions which his doctor said contributed to his death. A witness and his doctor said he died while in Israeli custody. He was found face down on the ground and unresponsive with his blindfold on.

Mr. Assad’s life and death reflected the daily perils faced by Palestinians living under Israeli occupation in the West Bank. The Israeli army regularly conducts night raids on Palestinian villages in an effort to thwart attacks, and residents may be stopped for roadside checks or arrested at home.

The autopsy was performed by the coroner of the Palestinian Authority, which administers parts of the West Bank. Mr. Assad had bruises on his head from traumatic brain injuries, he found, without saying what might have caused the injuries. And there was internal bleeding in his eyelids from being blindfolded, as well as other bruises on his arms and red marks on his wrists from zip ties.

“The investigation indicated that he was subjected to harsh treatment and violence,” according to an excerpt from the preliminary findings of the investigation obtained by The Times. “His body had numerous injuries documented and detailed in the autopsy.”

Initially, the Israeli army said Mr. Assad was alive when he was released. But later the Israeli authorities refused to answer questions about what happened while he was detained, what condition he was in when the soldiers left and whether he had received medical treatment, saying it was part of of the investigation.

Soldiers arrested Mr Assad in what the IDF described as a ‘routine check’ around 3am as he returned home after a night of playing cards and drinking coffee with cousins . An Israeli army spokesman said he was arrested after resisting scrutiny and refusing to cooperate with questioning.

The doctor who tried to resuscitate Mr Assad, Islam Abu Zaher, said his face was blue from lack of oxygen, adding that he had most likely been deprived of oxygen for 15 to 20 minutes – which , according to the doctor, could have caused his heart and lungs. to fail.

A witness said that when the soldiers discovered his condition, they abandoned him instead of giving him medical treatment. Dr Abu Zaher asked why Mr Assad appeared to have been thrown face down and why Israeli forces did not give him first aid before they left.

Mmdouh Abdulrahman, one of four other men detained by Israeli forces that night, said a soldier came to check on Mr Assad. The soldiers whispered among themselves, then one of them cut one of the zip ties that were on Mr. Assad’s wrists and they quickly left, Mr. Abdulrahman said.

As soon as the soldiers left the yard, Mr Abdulrahman said he unfastened Mr Assad’s blindfold and found no pulse in his friend.

Mr. Assad underwent open-heart surgery and several stents were implanted about four years ago, according to Dr. Abu Zaher, who said he had been treating Mr. Assad for obstructive lung disease in recent months. The lung disease could have prevented him from breathing lying on his stomach, Dr Abu Zaher said.

Mr. Assad and his wife, Nazmieh Assad, moved to the United States in the 1970s and opened several grocery stores. They returned to Jiljilya more than a decade ago, but Israel revoked their Palestinian identity cards while they were abroad.

Before being detained, Mr. Assad was hopeful that he would soon be able to travel freely between his birthplace in the West Bank and his adopted country in the United States. He was eager to return to the United States to see his seven children, 17 grandchildren and three great-grandchildren, but feared Israel would not allow them to return home without Palestinian IDs. They had spent the past few years trying to get them reinstated.

In the weeks leading up to his death, Mr. Assad expected that his name and that of his wife would soon appear on a list of approved reinstatement applications.

On Monday, nearly two weeks after Mr. Assad’s death, a new list of names was released. Their names were on it.