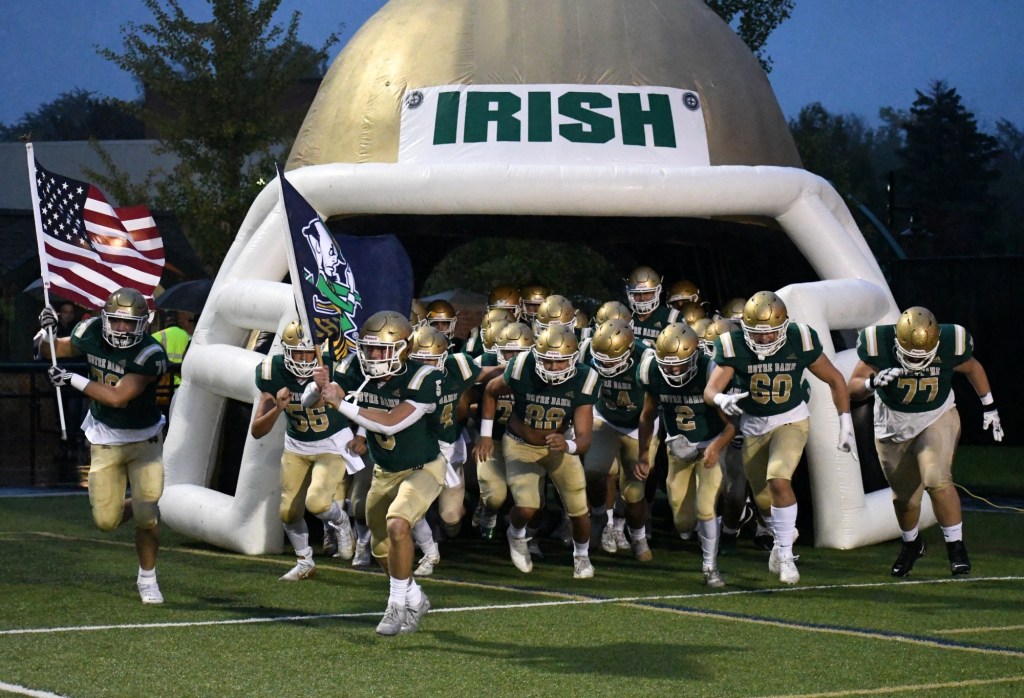 PONTIAC — With a young football team, a head coach just wants to see progress from week to week.

After a tough opening defeat to Clinton, 30-27, two weeks ago, the Irish picked up their first win last week with a hard-fought 36-26 win over Renaissance.

On Friday night, Fox saw his side take a big step forward with a dominating 50-7 win over Macomb Lutheran North.

“We only have 11 seniors, so we rely on a lot of juniors and sophomores. It means we should be a team that is going to grow every week and keep getting better,” Fox said of his team. “I think we can be a whole new team by the end of the year if we keep working and learning from our mistakes. This is a hard working group.”

Notre Dame Prep (2-1) showed their youth on their first two possessions as they had a bad snap on a punt and a turnover put their defense against the wall. The Irish would react, getting defensive saves on the Mustangs to build momentum.

From there, the Notre Dame Prep offense would get back on track late in the first quarter.

Facing a 4-and-11 play from the 15-yard line from Lutheran North, Irish QB Jacob Tuttle connected with Evan Hoke on a TD pass to go up 6-0.

On the 4th and 11th, NDP’s Jacob Tuttle finds Evan Hoke for a 15-yard touchdown pass. PAT is missing. The Irish lead Lutheran North 6-0 at the end of the first @MIPrepZone pic.twitter.com/yYStC8scu8

Lutheran North (1-2) then fumbled on his first play of the following possession, and Tuttle quickly found Zach Conroy for a 24-yard touchdown pass to make it 13-0 within seconds.

“We played very sloppy at the start. We are a young team that is improving a little every week. We certainly had a good response to the slow start, but we need to be better at the start of the game,” Fox said.

The NPD defense forced another quick punt from the Mustangs, which allowed the Irish offense to cover 60 yards in four plays for another score. Running back Zach Mylenek did most of the damage, including a 25-yard TD run to make it 20-0.

After nearly blocking several punts earlier in the game, Landon Hehl finally got one for the Irish. The blocked punt was then picked up by Evan Gaeschke in the end zone to make it 27-0 NDP.

The Irish went 35-0 on their next possession as Mylènek kicked it in from one yard. A 2-point pass from Tuttle to Jeremy Gale completed the first half score.

“We had a good balance with our offense and that’s what we’re working towards,” Fox said. “Jacob is a junior and Zach is a junior, and they’re both giving us everything they’ve got.”

Mylenek added a 23-yard touchdown run in the second half, while Roman Cherfoli scored on a 9-yard run to close out the Irish touchdowns.

Lutheran North got its only touchdown in the fourth quarter when quarterback Eddie Cesar hit Hudson Macdonald on a 65-yard strike.

Cesar completed four passes for 132 yards, but the NPD defense was in his face all game long with pressure. When he managed to clear the ball, the Irish secondary consistently deflected passes. Sophomore Joey DeCass led the way with four, while junior Caden Husch recorded an interception.

“Last week, I felt like we didn’t play well in the secondary and we could have put more pressure on the quarterback. This week we played the way I want to see us play. We really made the quarterback uncomfortable and our young defensive backs really worked hard and made good plays,” Fox said.

Mylenek was the workhorse for most of the game for the Irish, finishing with 177 yards on 22 carries with three touchdowns. Junior Bradon Prater usually splits his time in the backfield, but was nursing an ankle injury this week and rested.

Lutheran North was limited to 50 rushing yards on 23 carries.

The Mustangs are looking to bounce back from Friday’s performance next week when they host Livonia Clarenceville.

Notre Dame Prep will be looking to pick up a third straight win next week on their trip to Detroit Loyola.