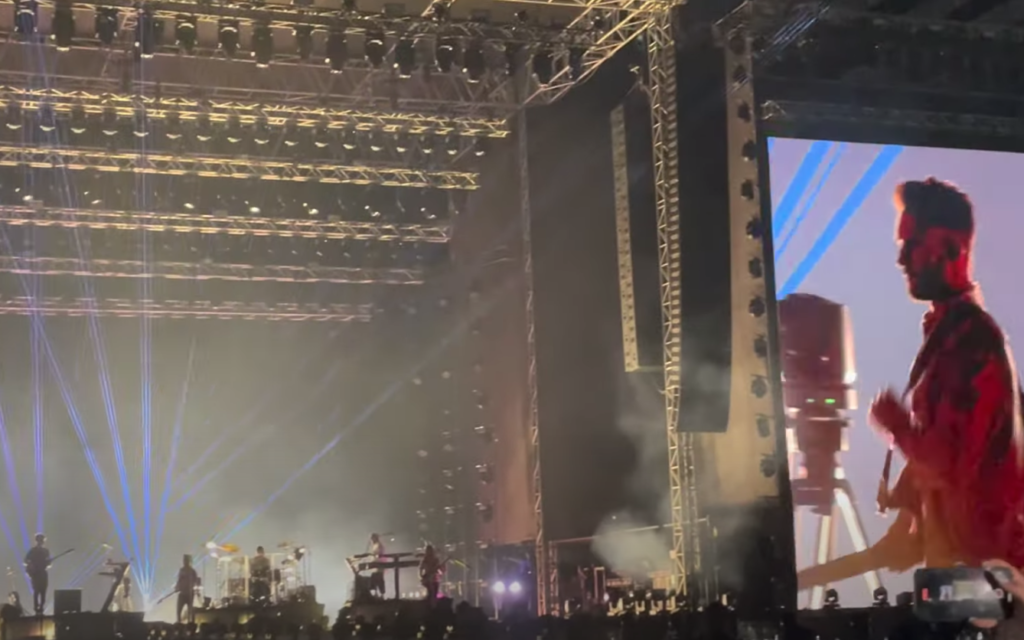 It was a feast of love for Adam Levine and the Tel Aviv crowd on Monday night, with the Maroon 5 singer raving about his reception by the estimated 55,000 spectators.

“Oh man, hello Tel Aviv! I want to hear you!” Levine called out to the crowd after opening the show with the 2004 hit “Moves Like Jagger.”

“I can’t even describe to you how excited we are tonight,” Levine said, according to Ynet. “I have never been to Tel Aviv and Israel and I have to tell you this place is amazing. You have welcomed us with open arms.

Levine played his electric guitar on 2004 song ‘This Love’ and had the crowd singing when the band switched to ‘Stereo Hearts’, telling the audience that most of them weren’t born when Maroon 5 came out with its debut album, 20 years earlier.

The band’s playlist for the evening was a review of hits from the past 20 years, including “What Lovers Do”, “Animals”, “One More Night”, “Payphone” and “Wait”.

Levine even brought on stage a busker from Tel Aviv, Carol Bismuth, whom he had spotted a few days earlier playing on the boardwalk from the balcony of his room at the Dan Hotel.

The singer has been posting on Instagram since arriving in Israel over the weekend, sharing posts written by adoring Israeli fans as well as his outfit for Monday night’s show (“Textures,” he wrote, showing his button black and white striped -down shirt layered over a denim jacket”).

One of Levine’s last messages before the show was “HOLY FUCKING COW” followed by grateful hand emojis, hearts and #TELAVIV,” in full view of the crowd at Tel Aviv’s Yarkon Park.

You are a dedicated reader


We’re really glad you read X Articles from The Times of Israel over the past month.

That’s why we started The Times of Israel ten years ago – to provide discerning readers like you with must-read coverage of Israel and the Jewish world.

So now we have a request. Unlike other media, we don’t have a paywall in place. But since the journalism we do is expensive, we invite readers to whom The Times of Israel has become important to help support our work by joining The Times of Israel community.

For just $6 a month, you can help support our quality journalism while benefiting from The Times of Israel WITHOUT ADVERTISINGas well as access Exclusive Content only available to members of the Times of Israel community.

Thanks,
David Horovitz, founding editor of The Times of Israel