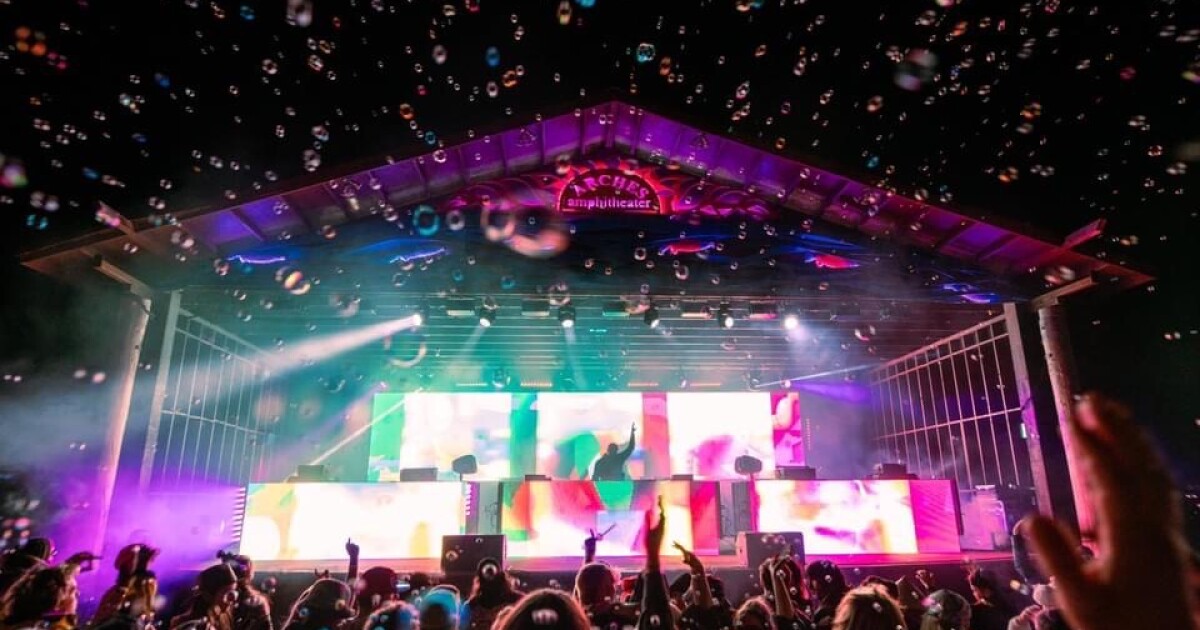 Three-member electronic band Balkan Bump mixed loops and beats with trumpet, clarinet and traditional Middle Eastern instruments like the string oud and an Armenian wind instrument called the duduk on a recent Saturday at the park Kenai Peninsula exhibits.

Projected onto the stage behind them was a digital psychedelic background of undulating colors synchronized with the melodies.

This is the California-based band’s first time to Alaska. This is also true for many acts that performed at the first ever Sacred Acre music festival held in Ninilchik in early September.

Maz Karandish is a multi-instrumentalist with Balkan Bump. He is Iranian-American and grew up playing traditional Persian music.

“I want to bring those sounds and music from the East and Near East in a way that invites and relates to the culture of American West Coast festivals,” he said. “It’s really mission because I see it as a form of cultural preservation.”

Balkan Bump was just one of more than 20 bands that performed at Sacred Acre Festival. The event focused on one genre of music: electronic dance music and the subculture that embraces it. According to organizers, the festival was the first of its kind in the state.

The three-day gathering was held at the same location as the popular Salmonfest music festival, which aims to protect salmon and the watersheds that support them. Sacred Acre has a similar conservation mission in mind: to advocate for healthy fisheries in Alaska.

Festival organizer Chris Miller said that after repaying the festival’s initial investments, future profits from Sacred Acre will be donated to bring attention to the effects of trawling bycatch in the Bering Sea.

Miller, who moved to Alaska about five years ago, has been hosting raves in Colorado and New Mexico since the mid-1990s.

“I fell in love with Colorado’s bass and electronic festivals,” Miller said. “So I’m just a longtime fan and wanted to bring this to this state.”

And he landed in Ninilchik, a community of about 800 people in the center of the Kenai Peninsula.

Kelly Lyon is with Camp Unicorn, an intentional festival community she founded with her partner, Cale Laces. The couple leads a mostly nomadic lifestyle, living and working remotely from a converted van.

Lyon said Camp Unicorn was created to create a safe space for festival-goers, offering a community kitchen and bar, heaters, costumes and an art space.

“My partner and I host this space, but the community really brings it and brings it together,” Lyon said. “It’s community driven.”

Her partner Laces wore a homemade Cruella De Vil faux fur Dalmatian jacket, otherwise topless in reflective neon booty shorts, sporting a long red beard. Laces is a burly guy, which contrasts quite comically with his outfit. But if his costume is playful, his message is serious:

Part of Camp Unicorn provides test strips for the synthetic opioid fentanyl and distributes Narcan kits, which are used to counter opioid overdoses in emergency situations.

“We have partnered with an organization that distributes these [kits] of Project Hopewhich is to help counter the wave of fentanyl overdoses that we have going on,” Laces said.

A total of around 30 Narcan kits were donated to Camp Unicorn for the festival weekend. Camp volunteers were trained on how to test for fentanyl and administer Narcan.

Lyon said it only tested one sample over the festival’s three-day weekend. After testing what a festival-goer said was ecstasy, they discovered it contained fentanyl.

“A lot of people said they felt a lot safer knowing that these [kits] are available and around,” Laces said.

Safety at the festival was a major concern for more than the folks at Camp Unicorn.

Miller – the festival organizer – said a full security team and medical personnel were on hand in case of an emergency. The local EMS also showed up to help. He said there were 16 helpers walking around the festival grounds keeping an eye out for anyone in need.

According to Miller, there were no major medical incidents, but some close neighbors complained about nighttime noise. Each evening’s performances usually did not end until 6 a.m. the following morning.

“We really tried to create an after-hours environment to control campgrounds and keep sound away from homes,” he said. “It didn’t quite go well.”

Overall, Miller considered the festival a success. He said around 2,500 people, including vendors and volunteers, visited the fairgrounds over the weekend. And more than 300 of the ticket sales came from out of state.