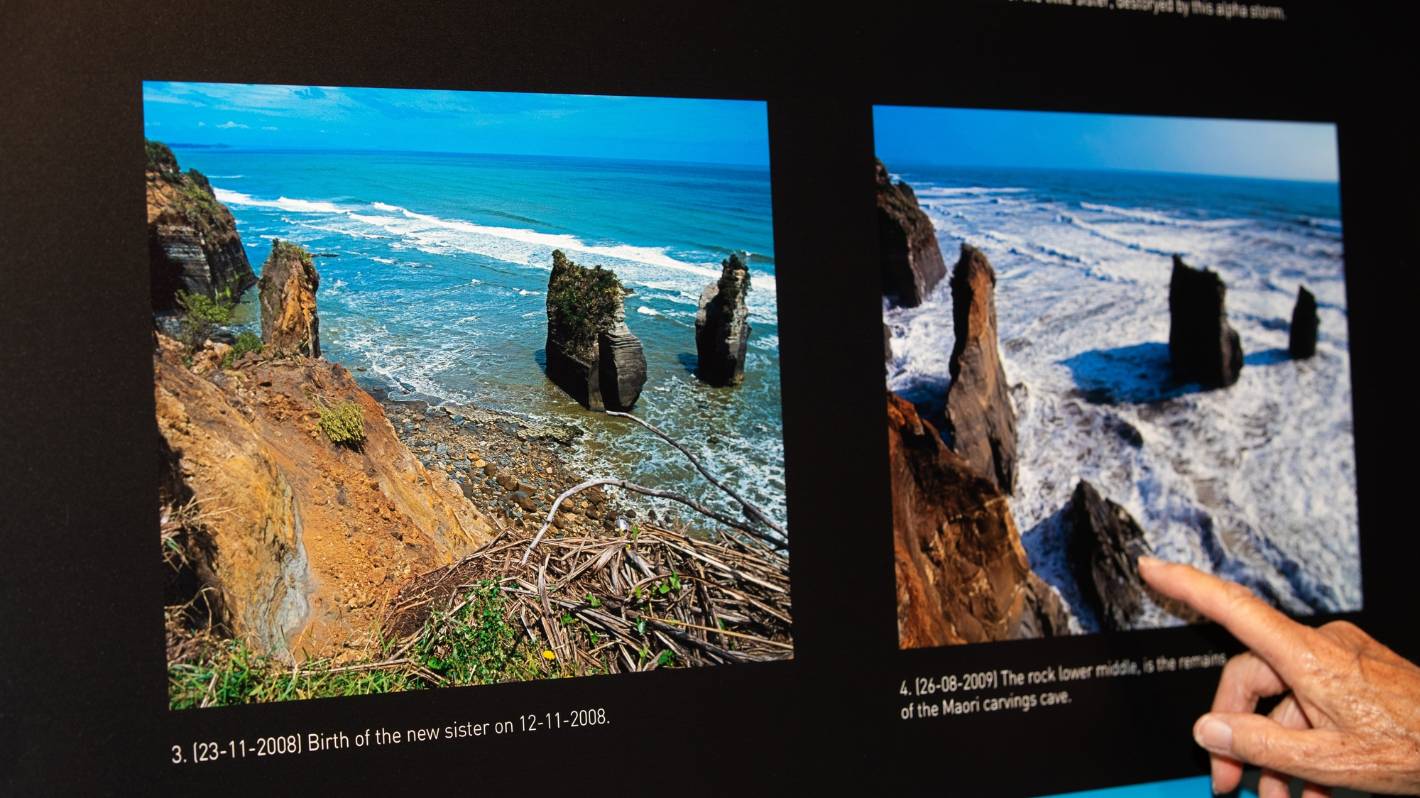 Pat Greenfield has focused his work on the Three Sisters and the nearby Four Brothers beach in Taranaki.

An engaged photographer has spent 20 years capturing the impacts of climate change on New Zealand’s coastlines and is ready to share her work with the public.

Pat Greenfield, 76, is an environmental activist and her photographic documentation has been her “contribution to society in the fight against climate change”.

“We have one Earth and that may show a small part of what we are losing.”

His comparison photos of the coast from Tongapōrutu to Taranaki were taken 18 years apart and are now on display at the Puke Ariki Museum in New Plymouth as part of the Impermanence exhibition.

Greenfield grew up in Auckland, but moved to Taranaki in 1991 and brought with her a love for painting and drawing.

Then 55 years old, she transferred her passion to film cameras and started taking pictures of local beaches.

But she fell in love with the Taranaki Coast and started traveling to Tongapōrutu to see the Three Sisters Rocks and nearby Four Brothers Beach, where she focused her work.

In 2003, Greenfield went to her usual lunch spot and pulled out her camera near the Tongapōrutu pilot point to capture the rocks she was sitting on.

“My tripod was packed so I thought I’d come back in a fortnight and do it again and when I got back they were all gone.”

“I thought things were changing so fast that maybe I should record them.”

After discovering the change in environment, Greenfield continued to visit that exact location and record what she saw.

Each month, the photographer would take her camera to the beach and make an “emotional connection” with the landscape – until one of the Three Sisters fell.

“I thought Christ was a rock, but it’s a family, and I’ve watched it over the years, and it’s like your own family when you lose a member you mourn.”

“I didn’t expect it to change and that’s what started it all.”

The idea behind his photos was to get people to understand the impact of storms and earthquakes on the coastline and to “identify with nature”.

“No one can turn back time.”

“The longer you can do this, the more valuable and important the images become.”

In the museum exhibit, Greenfield had included images of families to show the continuity of a lineage and the similarities it has with nature.

“They have a life, but they die, but the lineage continues and it’s the same with humans, so I used that to try to get people to understand that everything is interconnected.”

“It basically shows what we’re losing.”

“Climate change has always been around, but it’s more urgent now.”

Eventually switching to a digital camera, Greenfield also recorded everything in a diary.

“The more I climbed and observed, the more I kept a written journal of everything that changed.”

Her history of activism had been recorded over the years and Greenfield said it was her “call before she died”.

And she intends to pass on her environmental know-how to a young person who would do the same.

“Age goes against you and I can’t ignore what I know, but I can share it.”

“I have decades of experience, but what’s the point if your knowledge dies with you? »

The Impermanence exhibition opened on May 21 and will end on November 27.