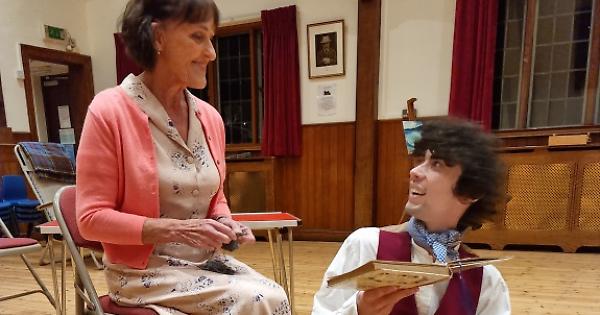 It was a case of art imitating life when the Henley Players began rehearsals for their latest production, Lavender Ladies.

The play is about Andrea, a Polish violinist sailing to America who is washed up on the beach of a Cornish fishing village and cared for by two sisters.

The actor who was to play the main role was himself rejected when he was offered a role in a film which he could not refuse.

“It was a nightmare because there aren’t a lot of talented young male actors,” says director Wendy Huntley.

She enlisted the help of a friend from the Progress Theater in Reading and it paid off.

“I said to him, ‘I’m desperate, I have to find someone who is really good,'” says Wendy.

“He gave me a number for Dean Stephenson from Progress who came and auditioned and was just perfect for the part.

“He is brilliant. He played Pip in great expectations at Forbury Gardens not long ago and he had some very good articles.

“We are lucky to have him. He fitted in beautifully.

ladies in lavender was adapted for the scene in the 2004 film written and directed by Charles Dance, who himself was inspired by one of William J Locke’s 1908 short stories.

The film is set in the 1930s and stars Judi Dench and Maggie Smith as sisters Ursula and Janet. In the Player production, the women are played by Jan Corby and Julia Ashton with Jenny Haywood as Dorcas, Mike Mungarvan as Dr Mead and Siggy Lee as Olga Danilof.

Wendy says, “It’s a beautiful story about two women who live together and this young man who washed up on shore and is a wonderful violinist.

“They’re looking after him – they’re bringing in the doctor to sort his leg which he broke on the rocks. They are like mother hens.

“Ursula falls deeply in love with him. She knows she’s stupid but she can’t help it. She’s never had love in her life and it’s what she’s longed for for so long.

“However, there is another young woman, Olga, a Russian with a brother who is a famous violinist and she is taking Andrea to America to make her fortune.

“It’s very poignant and moving at times, but we also have comedy. The governess has wonderful lines that just enhance the acting.”

Wendy, who has been in amateur theater for about 40 years, wants to put her own stamp on history.

She says: “It’s the same story but I didn’t base my characters on Judi and Maggie, I let Jan and Julie put their own interpretations on it. I don’t think it’s fair to try to copy someone but since that’s my interpretation, if it doesn’t go well, it’s my fault.

She ensured that the production was authentic.

Wendy says, “Angela, who does all of our props, music and sound effects, was able to get a violinist on board. She saw him play at Market Place and accosted him. He showed Dean how to use the violin and he actually played the music for the show.

“As Andrea is Polish, I had a young lady help me with the accent, but she said Dean really got it.

“I’m really proud of my cast and how they worked so hard to bring this beautiful piece together.”

ladies in lavender by the Henley Players is at the Kenton Theater in Henley from Wednesday 19th to Saturday 22nd October at 7.30pm with a Saturday matinee at 2.30pm. Tickets cost from £17. The show has a duration of approximately 140 minutes, with an interval of 20 minutes. For more information and to buy tickets, call the box office on (01491) 525050 or visit www.kentontheatre.co.uk