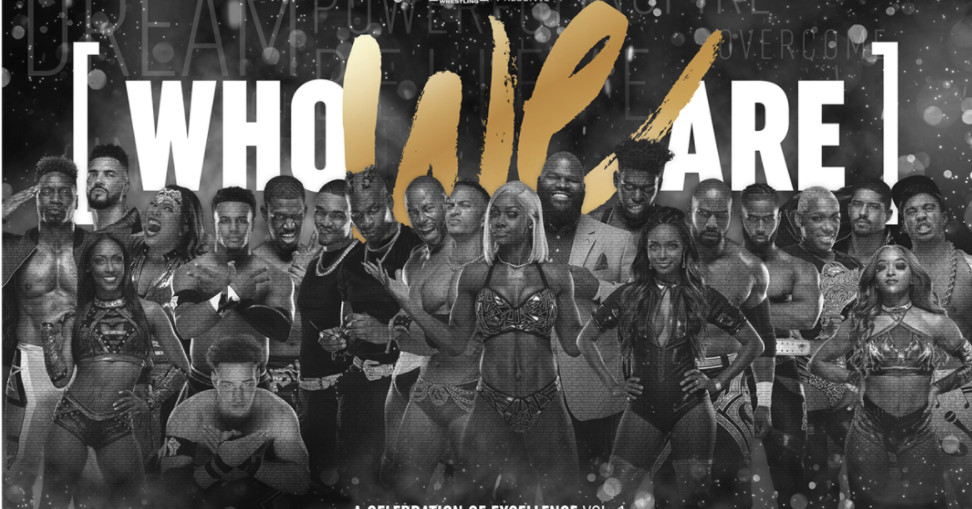 We’d heard a bit about AEW’s next musical project, and we’ll admit at first that we were a little worried it would be a revamp of the WWF-era ones. The Wrestling Album from the 80s. Fortunately, it won’t depend on roster members to fill an entire album’s worth of tracks (although now we’re a little disappointed it won’t include anything like “Grab Them Cakes” by Junkyard Dog).

Even better, it sounds like a really cool idea.

AEW provided details on Who We Are: A Celebration of Excellence, Vol. 1 as they start taking pre-orders today (February 1):

AEW announces “Who We Are: A Celebration of Excellence, Vol. 1″

To commemorate the start of Black History Month, AEW has revealed the upcoming release of Who We Are: A Celebration of Excellence, Vol. 1, a compilation album that will bring the stories of over twenty Black AEW wrestlers to life through the music of established hip-hop and R&B artists. Executive produced by AEW in-house producer Mikey Rukus, the promotion’s first-ever full-length compilation LP will feature an introduction by legendary funk musician Bootsy Collins, with proceeds from CD sales benefiting the Bootsy Collins Foundation.

Who We Are: A Celebration of Excellence, Vol. 1 will be released on Friday February 18, initially available exclusively in print format with pre-orders now open on BoutiqueAEW.com. Featuring 21 tracks, the album includes contributions from artists such as Jon Connor, Mega Ran, Brinson, Omega Sparx, Monteasy, Josiah Williams, Max Caster and AEW’s Sonny Kiss, and many more. In developing this project, Rukus used his previous experience working hand-in-hand with the AEW roster to curate their entry music, pairing wrestlers with producers and artists to tell their stories in a collaborative format. unique.

“A key aspect of my role in AEW is to deliver a multi-faceted audio experience for fans that delves into the essence of the characters they see on screen each week, as well as the stories behind the individuals who bring them to life. to these characters,” said AEW Music Producer Mikey Rukus. “Who We Are is like a bunch of ’30 for 30′ episodes for black wrestlers in AEW. The release of this project during Black History Month in a culturally authentic and familiar-sounding format, while allowing these incredible talents to share their personal journeys, is special for everyone involved.

Who We Are: A Celebration of Excellence, Vol. 1 will be released on streaming platforms in the near future, and its initial print-exclusive launch will directly benefit the Bootsy Collins Foundation, which Rukus and the AEW Community Outreach Team identified as a viable partner during the development of the ‘album. The Bootsy Collins Foundation strives to inspire, educate and enrich the lives of individuals from all walks of life through music.

“Bootsy helped define what it meant to be a black artist in America early on,” said Patti Collins, wife of Bootsy and president of the Bootsy Collins Foundation. “Bootsy’s involvement in this project is a perfect convergence of past, present and future, and we are grateful to have the chance to continue to inspire future musicians as beneficiaries of the album.”

The tracklist of Who We Are: A Celebration of Excellence, Vol. 1 understand :

The idea is cool. Will the execution take place? Pre-order here for $16.99 and find out in a few weeks!

How do payday loans work?